Photos: The Night The New York State Pavilion Was Illuminated Last night the three structures that make up the New York State Pavilion, built for the 1964-65 World's Fair, were illuminated following a screening of the documentary Modern Ruin. Last year, Queens Borough President Melinda Katz performed a lighting test, in hopes of bringing a semi permanent lighting installation to the Pavilion—while that has yet to happen, last night's brief light show proved fairly popular. (The NYPD did show up, an officer addressing the crowd: "Well, no one invited me!")

Will the lights become a regular feature? Director of the doc and co-founder of People for the Pavilion, Matthew Silva, told us today: "Last night's thing was a one off kinda thing. We are unsure of the future of any lighting schemes at this time." 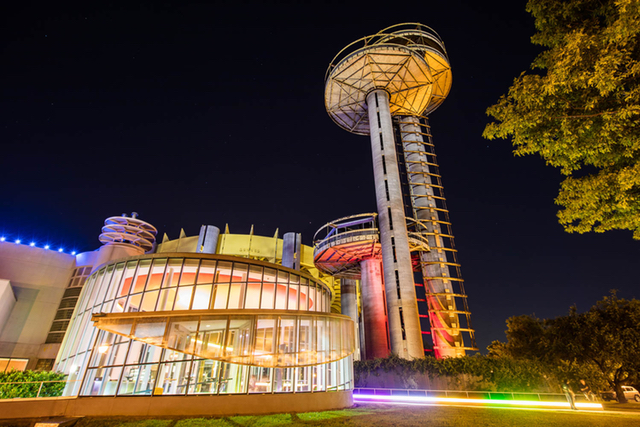 #new york state pavilion
#world's fair
Do you know the scoop? Comment below or Send us a Tip
A new Gothamist is coming! We’ve moved comments over to our beta site. Click here to join the conversation and get a preview of our new website.