After being closed for four months of renovations, the 23rd Street F/M station reopened on Thursday with a doggone great new look, including new benches, glass doors, clear and concise video screens, and best of all, a series of dog mosaic tributes to everyone's favorite hangdogs, the Weimaraner. Is this the MTA giving New Yorkers an implicit signal that dogs belong on the subway? I and my stoic friends below choose to believe. 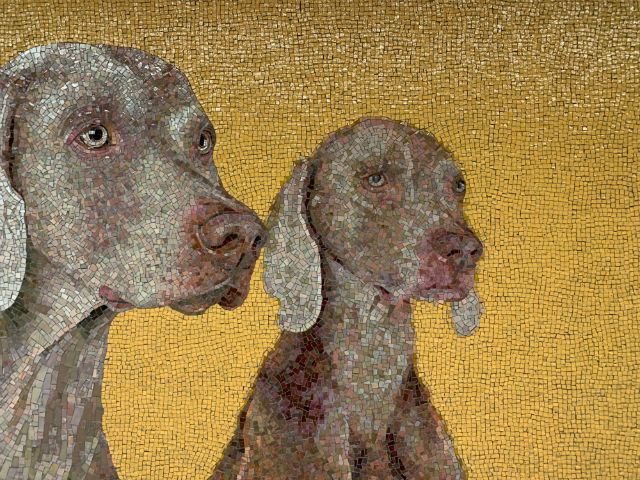 The dogs are the handwork of artist William Wegman, part of his "Stationary Figures" series of photos of his own Weimaraners, in which they take on human attributes by wearing raincoats and flannel, or by gazing into space or down the platform as if waiting for the train. There are eleven glass mosaic panels of the dogs, fabricated by Mayer Of Munich, spread out throughout the station.

"I wanted to create portraits of individual characters, people who you might see next to you on the platform," said Wegman, who has lived in the neighborhood with his dogs Flo and Topper for decades. "For these I dressed the dogs in more or less ordinary clothes, nothing too fashionable. I was very interested in the way in which photographs, even the out of focus dogs in the background of some images, could be translated into mosaic by Mayer of Munich, who skillfully turned grey stones into grey dogs."

The station suspended subway service on July 23rd for the renovations. According to the MTA, it along with two other stations (57th Street F and 28th Street 6) were all closed last summer because of the various states of disrepair that included "crumbling concrete and deteriorated structural steel columns and beams, cracked or missing tiles, water leaks, and deficient lighting." Work at those three stations was part of "a competitive $124.9 million contract awarded in February 2018 to Judlau Contracting with HDR for repairs and improvements at a total of five subway stations," the MTA said in a statement.

Last month, the 72nd Street B/C subway station reopened with enchanting murals from artist and activist Yoko Ono. All these stations were part of a previously announced station renewal initiative to improve 30 stations to make them "cleaner, brighter... easier to navigate, with better and more intuitive wayfinding, as well as a modernized look and feel." Some transit advocates have criticized the renewal program because it ignores adding accessibility, like elevators, to stations and doesn't necessarily improve train service.