Photos: The New McCarren Park Pool Is Ready To Make A SPLASH

Long gone are the days that we were lining up around the neglected McCarren Park Pool to attend free concerts. As the sun set on the summer of 2008, that party had ended, and concert-goers were forced over to the much more militantly-run East River Park for the annual "Pool Parties." It was officially the end of an era... or the return of a past era, depending on how long you've lived in the neighborhood. Plans for the comeback of a working community pool were drawn up, and the ground was broken. Things were dodgy there for a while, but now this summer the $50 million plan will finally become a reality... though we don't see a Dodgeball Tom Memorial Court anywhere in these new photos. Not even a statue.

On June 28th McCarren Park Pool will make its return, and Geoffrey Croft reports that the "facility boasts a 37,9500-square-foot pool, which will accommodate 1,500 swimmers and eight 25-meter lap lanes; a beach; spray showers; and a restored year-round recreation center with a gym, basketball court, weight room, dance studio, cardio room, and multipurpose community space. Wood panels recycled from the Coney Island boardwalk are among the decorative features. The once-glorious diving pool has been replaced by a beach volleyball court." 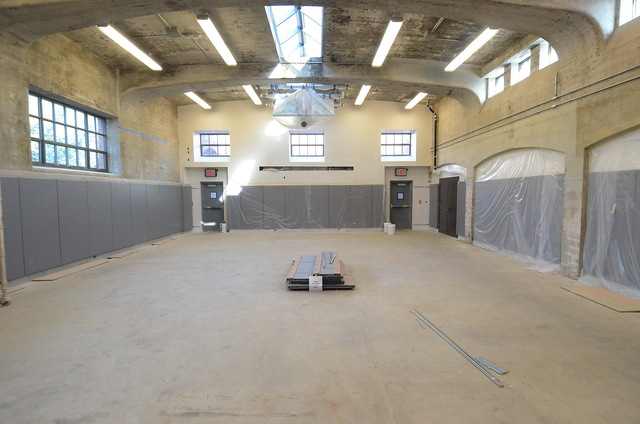 Photo via the Parks Department

Here are some photos of progress in February, and even further back, as the pool looked in 1937.

#brooklyn
#mccarren
#McCarren Park Pool
#photos
Do you know the scoop? Comment below or Send us a Tip