In 1961, LIFE magazine visited the home of Mr. and Mrs. Si Merrill in Manhattan, who a year prior had brought an exotic jungle cat into their home as a pet. The Margay is currently listed as "near threatened" in the IUCN Red List of Threatened Species but back then it seems it was cool for wealthy New Yorkers to bring them out of their natural habitat and into their apartments. From the original article:

"Stylishly ringed and striped, Mentezuma the margay is probably the most elegant pet to be found in New York City. A small South American jungle cat, Monte finds life as interesting indoors as it had been in the Ecuadorian wilds where he was born. He leaps on the tops of doors and bookcases as if they were treetops, stalks pet birds and fur pieces as if they were his natural prey.

Monte belongs to Mr. and Mrs. Si Merrill, who bought him as a kitten a little over a year ago. An incessant talker, he is either gently growling for his meals of beef or turkey heart or just yipping and yowling conversationally. He loves to have his velourlike fur vacuumed, knocks over plants to get attention. He searches visitors handbags carefully for leather gloves to chew on.

Monte has always been delicate to raise and his medical bills run high. Because of his imaginative way of creating and finding mischief he requires almost constant supervision.

'But life would be far less fun if Monte weren't here,' says Mrs. Merrill, 'In fact I don't think I could live without a margay.'"

The sentiment was likely not reciprocated, as margays are "solitary and nocturnal" animals preferring remote sections of the rainforest to 5th Avenue doorman buildings. Though as LIFE.com notes, they "live largely on birds in their native arboreal habitat—and New York, of course, has an abundance of plump pigeons." 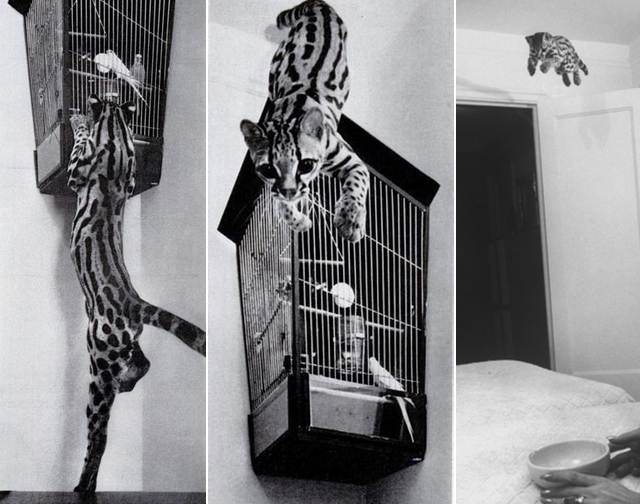 What was it with New Yorkers and unusual pets back in the day?