Rock and roll has existed for over 70 years now, ever since that fateful night Marty McFly first strapped on a red Gibson guitar, blazed through a ridiculously good version of "Johnny B. Goode" at his parents' high school dance, and inadvertently inspired a young man named Chuck Berry to do the same (despite the timeline contradictions therein, but that's neither here nor there, don't think too hard about it!). But in all that time, The Metropolitan Museum Of Art has never had an exhibit dedicated to the genre—until now. Starting next Monday, The Met will host the "first major exhibition in an art museum dedicated entirely to the iconic instruments of rock and roll." And appropriately, Berry’s electric guitar ES-350T, which he used to record his iconic "Johnny B. Goode," will be a part of it.

"Rock and roll is 70+ years old, and there are still a lot of living legends who could participate, who could lend their objects and expertise to the show, and that's why I think it's a perfect time for The Met to do this exhibition," said curator Jayson Dobney.

Some of those stars, including Page, Felder, Miller and Weymouth, were on hand for the kickoff of the exhibit at the museum this week. "I’d take my guitar to school and have it confiscated and given back at the end of the day," Page said at the event (you can watch his full remarks here). "This day today is something that I would never have dreamed of."

"The Rock and Roll Hall of Fame was established by our founders because they really felt that rock and roll was the art form of our generation," added Rock & Roll Hall of Fame CEO Joel Peresman. "This exhibit will truly bring that art form to this cathedral of art that is The Met."

Felder also played "Hotel California" at the event using his double-necked guitar (which will be on display there).

And for the finale of this awesome program — a special performance of “Hotel California” by @donfelder! 🎶 #MetRockandRoll pic.twitter.com/3i9ZUCawhG

WNYC’s John Schaefer says the exhibit "treats today’s guitars with the same respect as yesterday’s violins. Instruments can be more than tools of the trade: they are often works of art themselves, and are emblematic of cultural moments. With rock having been the dominant musical style of the second half of the 20th century, this new exhibit gives viewers an up-close-and-personal look at guitars (and lots of other instruments, but mostly guitars) that have gained an almost iconic status." Listen to Schaefer's WNYC segment below:

The Met described more details of the exhibit in a press release:

Organized thematically, Play It Loud will explore how musicians embraced and advanced emerging technologies; the phenomenon of the “Guitar Gods;” the crafting of a visual identity through the use of instruments; and the destruction of instruments in some live performances, one of rock’s most defining gestures. The exhibition will include many of rock’s most celebrated instruments, including such guitars as Jimi Hendrix’s electric guitar “Love Drops,” originally decorated by him; Eric Clapton’s “Blackie,” Eddie Van Halen’s “Frankenstein,” Jerry Garcia’s “Wolf,” and Joan Jett’s “Melody Maker,” as well as drums from Keith Moon’s “Pictures of Lily” drum set. By displaying several rigs used in live performances and sound recordings, the exhibition will also demonstrate how artists created their own individual sounds, and some 40 vintage posters, costumes, and performance videos will illustrate key components of the musical movement’s visual style and impact.

But wait, there's more: not only is the exhibit chockfull of amazing rock and roll artifacts—there's also tons of random rock swag to purchase. In addition to a fully illustrated catalogue of the exhibit, The Met Store will have a bunch of tie-in products like electric guitar socks; Grateful Dead dancing bears coasters, bottle openers, and flasks; psychedelic poster pocket mirrors; mini-Van Halen guitars; a black denim jacket with flames on it (plus a matching drawstring bag with flames); and my two favorites: a "You Rock" blue hand candle, and Steve Miller Band T-shirts. 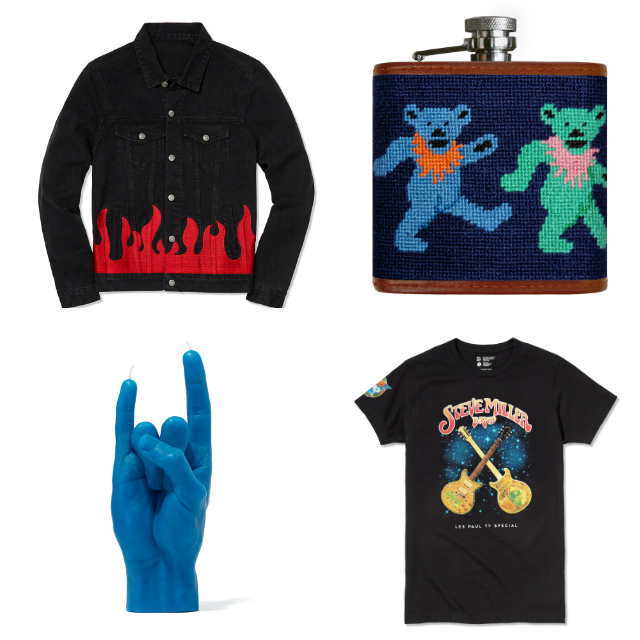 (Courtesy The Metropolitan Museum Of Art)

Correction: The Met curator's name has been updated; it's Jayson Dobney, not Jason Dominic.

#guitars
#instruments
#met
#Music
#play it loud
#the met
#the metropolitan museum of art
Do you know the scoop? Comment below or Send us a Tip