There's an open-air, historic, aesthetically-pleasing venue with a capacity close to Madison Square Garden's just off the F train, but you most likely haven't been there. It's got a musical history that holds up against the massive Manhattan arena's, too, but unlike MSG, Forest Hills Stadium in Queens has brought bands and fans to a much more bucolic setting for decades.

The stadium grounds haven't been solely for tennis for some time, though that's what many know it for—the West Side Tennis Club has called it home for over a century, and still own the 14-acre property. Prior to the horseshoe-shaped stadium being built in 1923 (the first event there was the International Lawn Tennis Challenge finals), the Club had moved onto the grounds in 1912, building a Tudor-style clubhouse. Mid-way through the 20th century, however, music was being added to the roster of big name matches—a natural move for any sports stadium.

The stadium has a capacity of around 14,000, and during its glory days it saw acts like The Beatles, The Supremes, Joan Baez, The Who, Jimi Hendrix, Simon & Garfunkel (who grew up in the neighborhood), Judy Garland, Neil Diamond, and Frank Sinatra. The Rolling Stones played there, too, their performance later resurrected for a Mad Men plot line. It's also where Jimi Hendrix—on July 16th, 1967—flipped off thousands of Monkees fans, walking off stage and off the tour he was so confusingly a part of.

The U.S. Open left the courts in 1977, the NY Times declaring it "The Last Day At Forest Hills," and in 1978 the Open relocated to the National Tennis Center at Flushing Meadows-Corona Park. Forest Hills sat in the shadow of the World's Fair grounds, and its new (larger) tennis center essentially made Forest Hills Stadium a ghost town. (Here's a look at the grandstand's darkest hour.) It was essentially left to decay, with some tennis and only an occasional concert, but even those ended in 1997. To the best of our knowledge, the last show prior to the stadium's 2013 return was the Dysfunctional Family Picnic (that year, '97, featuring Foo Fighters, Echo and the Bunnymen, Luscious Jackson, and others). 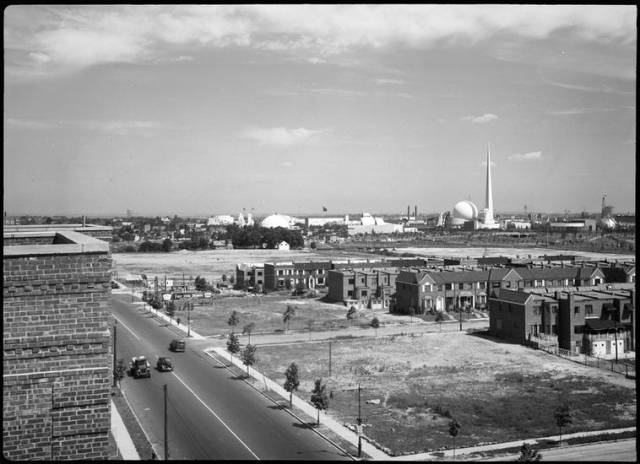 View from Forest Hills of the World's Fair site, with the Trylon and Perisphere, 1939. (Courtesy of the Museum of the City of New York)

In 2011, the stadium was called a "crumbling ruin," the NYC Landmarks Preservation Commission denied it landmark status, and the West Side Tennis Club got an offer to raze the stadium for a condo development. Instead, they dedicated some time and money into restoring it as a concert venue. Phew. In 2013, concerts returned, but as of this year it's safe to say they're really back.

The lineup this summer is solid—in 2013, the Club's president Roland Meier, during the first stages of renovations, stated that the "stadium has a great history and we’d like to see classy events." With that in mind still, the lineup this summer is more nostalgia-driven: Paul Simon will return, Van Morrison, Dolly Parton, and even Bob Dylan, who dealt with a rowdy audience his last time on that stage, in 1965.

"Facing a rude and immature audience, Bob Dylan gave a program Saturday night in Queens in which he was a model of patient composure," the NY Times reported. This concert took place about a month after Dylan controversially plugged-in at the Newport Folk Festival, something that his audience was (still) reacting to. "Nothing so dramatized the childishness of the audience's reaction to folk rock than when it ceased to boo and started to sing along with the popular song, 'Like A Rolling Stone,'" the Times added. "Evidently the hostility extends only toward things with which they aren't familiar." Let's hope the old man plays all hits this time around!

There aren't too many videos or recordings from the time, but are a few:

Earlier this year, John McEnroe declared, "It's incredible when you think about the history there. I'm so happy that the club and these concert promoters have resurrected the stadium. I think that this is another great step for the club and for the history to get some real professional tennis there."

Recently we took a tour of the grounds, which are looking good, and are filled with bits of the past—stay tuned for that later this week. In the meantime: you can even spot the stadium and surrounding grounds in Alfred Hitchcock's Strangers On A Train, and Wes Anderson's Royal Tenenbaums. Strange day out here at Windswept Fields:

#flashback
#forest hills
#forest hills stadium
#history
#original
Do you know the scoop? Comment below or Send us a Tip