In Hidden Cities, his memoir about urban exploration, Moses Gates describes the first time he walked off the subway platform and down onto the tracks: “It was only one step past the sign, but the mental barrier was enormous.” That sentiment leapt to my mind a few weeks ago, around 11 p.m. on a Sunday night, as I moved with a group of nervously giggling strangers around a corner in industrial Greenpoint and found myself walking right up the closed exit ramp to the soon-to-be-dismantled old Kosciuszko Bridge span.

The Kosciuszko, built in 1939 as the Meeker Avenue Bridge, was voted the worst bridge in the city way back in 2009, and its reputation has certainly not improved since. Designed to carry 10,000 vehicles per day, it became responsible for 18 times that many; add to that the lack of shoulders or any drainage system, and it’s easy to see why the bridge was known for maddening delays. Construction on its replacement — New York’s first new bridge in 50 years — began in 2014, and Governor Andrew Cuomo flashily opened half of it in April.

Despite rumors of a spectacular demolition, it looks like the city is not going to blow up the old span, opting instead to lower the main piece onto barges on the Newtown Creek, then demolish the approach sections separately. The dismantling process is now underway.

In the meantime, the two bridges soar side by side over the water, the shiny new cable-stayed bridge with its multicolored light show barely obscuring the hulking old steel truss bridge behind it. It was up onto that grizzled landmark that we climbed, to celebrate the past in the shadow of the future.

“This has been my favorite bridge since I was a child,” the event organizer, who asked that her name not be revealed for obvious reasons, told me. “I remember being in a car as a kid, passing over from Queens, seeing the cemetery with the skyline behind it, and recognizing that there was something fascinating about that juxtaposition. The bridge has always struck me, every time I cross it. I always wished I could be here, just for a minute. And here we are.”

This was my third visit up in that giant metal cradle, the culmination of a series of three parties. None were publicized. Guests received invites by text or Facebook message promising “a ritual celebration of a New York City icon before it falls to dust. Tonight, we seize and honor this specific moment in time, a bridge between all that came before and all that will come after.”

Once we’d gathered in a corner of McGolrick Park, a guide arrived to lead us to the soirée. He explained where to walk, when we needed to be quiet or quick, and looked at us pointedly and said, “You all understand that this is totally illegal, right?” 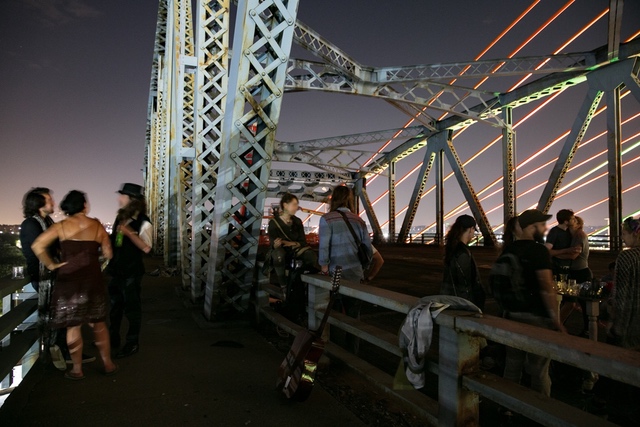 But the strangest part was how little it felt like we were doing anything wrong. Unlike some blowout trespass parties, this one was small and intimate, with only about 40 people sprinkled across the massive bridge. There was a bar, with suitcases full of extra booze beneath it; there were blankets and candles spread out for lying in supine awe of the massive infrastructure all around us. A fellow strummed a guitar and sang; a woman took out some of those flowy silk dancing fans and we watched her spin around and around.

Someone had brought a stack of takeout menus, and at one point he gathered us all on the northern railing of the bridge for a paper airplane contest — we all leaned out too far, high up in the air, watching the paper craft fly and fall, and no one could remember, at the end, who’d flung the winning one. Eventually a few people started shinnying up the struts, but for the most part everyone stayed close — relatively speaking — to the ground.

For an illegal party, it was a pretty serene, very sweet night. I’ve been in this city for 16 years, and as it gets ever denser all around me, I find myself always looking for ways to be alone, or to at least be where the grasping, thrumming, huddled masses are not. That’s part of what makes urban exploration so thrilling: finding the strange and lovely spots where no one else would ever go. The organizer shares that sentiment: “There’s something so gratifying about being able to be in these beautiful places, to hold them and make them exactly what we want them to be. And of course it’s a little bit rebellious, too: taking back the city that seems to always do whatever it wants to us.”

#greenpoint
#Kosciuszko bridge
#parties
#urban exploration
#original
Do you know the scoop? Comment below or Send us a Tip