Photos: The Fung Wah Biennial Took Me On A Weird Art Field Trip A blond woman in giant sunglasses smiles at me. "So, this is the ten o'clock bus to Philly?" she asks, but then walks away before I can reply. I'm standing outside of Focus Travel Bus Ticket Agency just before 10 a.m. on a Saturday morning. A man named Matthias hands me a flyer with the words Fung Wah Biennial printed across the front, and I've given my phone number to a young couple holding a giant clipboard. They give me another one in return. Beside me a thin guy clutches a homemade vase. We're all surrounded by a group of forty excited people, and we're headed toward a very strange day.

Last weekend I attended the Fung Wah Biennial, a twelve hour traveling art encounter that took me from lower Manhattan to Philadelphia and back amidst a near-sensory-overload of independent works. Loosely based around themes of human migration, the temporary show takes attendees (artists included) on road trips from Manhattan to Boston, Philadelphia, and Baltimore, paying tribute to the now-defunct Chinatown Fung Wah line.

Queens arts space Flux Factory, along with co-organizers Will Owen, Sally Szwed, and Matthias Borell (flyer guy) are the minds that brought the Fung Wah Biennial to life. They've populated it with art pieces that work through "discrete actions, unfamiliar offers, pleasant services"—all of it designed to distort being, distance, and travel.

I struggled throughout the day to find the proper term for it all. The Fung Wah Biennial is part gallery, part exhibition, part weird field trip.

As I walk onto a coach bus I'm handed a felt bag. Contents: a golf pencil, earplugs, the wrapper to a Fortune Telling Fish, a small pouch of rice, and a hand-drawn pamphlet with tips on how to stay entertained on the road (I never open it, but it's nice to have anyway). My phone becomes a chorus; checking it reveals that I've been included in a Whatsapp text conversation between two artists performing a sad, drawn-out break up. It lasts all day. I'm served sassafras tea by a woman whose day-long art piece is acting as stewardess for the entire group. By the time I notice a guy using a power drill to screw a computer monitor into a makeshift table as his partner works on a power point, I give up trying to figure it out. I let go and enjoy the ride. 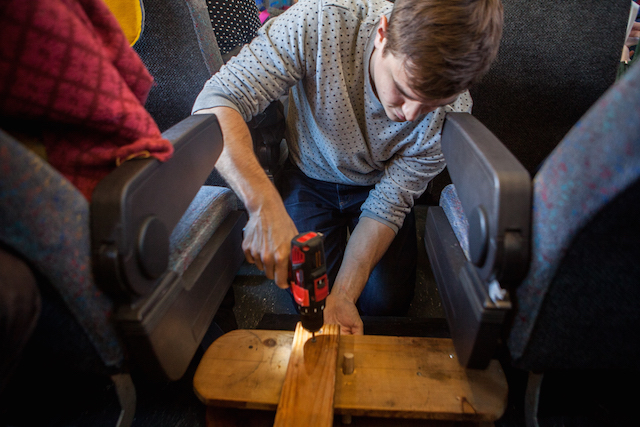 Halfway to Philadelphia and the monitor is being used to show a silent play about travel ethics, petty theft, the New Deal, Bertrand Russel, and a bunch of other stuff. My phone is still pinging with text notifications; the couple is fighting about last night's karaoke. I'm given a one-page survey to fill out by a man named Jonah from art collective Everyhere Logistics. The paper is the exact same purple pastel color as his shirt. When I'm done, he invites me to the back of the bus to be "processed."

We pull into Philadelphia just after noon and immediately the thin guy drops his vase on the sidewalk in front of the bus. Its shattering cuts through the ambient street noise. A woman with a dustpan quickly appears and begins sweeping up the pieces and I'm later told that it was all intentional. The artist, Adam Milner, works with archives, drawings, and public performance. "I'm planning to do this again, on a greater scale," he assures. Milner dreams of a long-running piece in which he "accidentally" drops a pot in the same place at the same time for weeks on end. "I want to manufacture de ja vu." 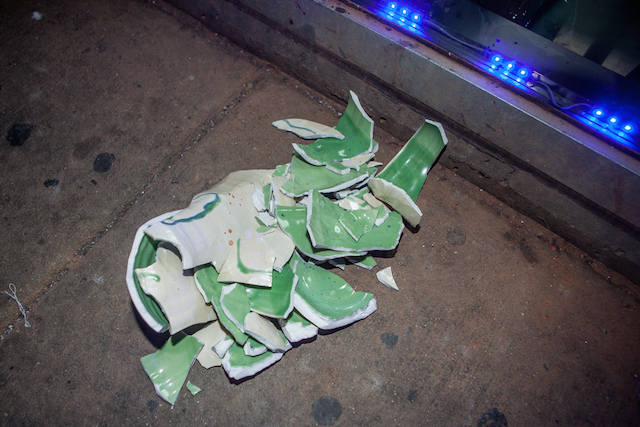 Pot pieces disposed of, my group is lead along to an apartment belonging to Brad Duncan, a collector of radical leftist books, flyers, newsletters, and other ephemera. He shows independent proto-zines from the Third World Women's Alliance, Philadelphia Free Press, Communist October League, and Black Workers Congress. All of it still loosely tied to ideas of place and migration, his archive is massive (and quite popular online). 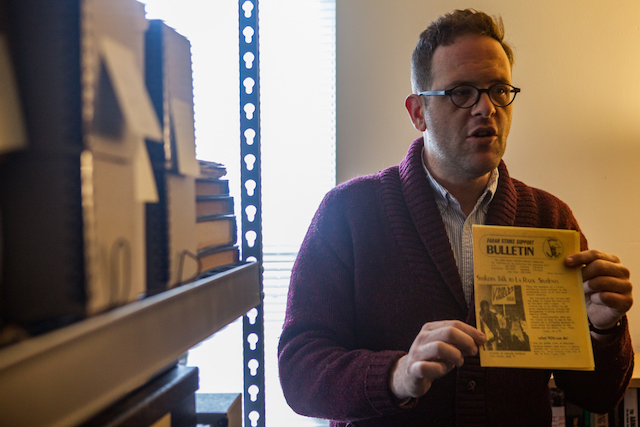 After an hour with Duncan, it's time to get back on the SEPTA train, a transit system that no one on the Fung Wah Biennial is used to. Forty people buying entry tokens and finding the correct stops—it's a convoluted mess. But this chaos is also curated.

"Our little transit insecurities are a part of the experience as well," organizer Chloe Bass tells us as she leads us onto a train car. "They're not planned, but they're completely intentional."

The rest of our day in Philadelphia includes visits to Vox Populi for a live science fiction reading, regular old gallery-viewing at Space 1026, and a bit of relaxed conversation at the city's Asian Arts Initiative. After that it's dinner time, and I join a few Fung Wah travelers at a Chinatown restaurant recommended to me via texts from a phone number I've never seen before. Finally, it's time to head back to New York. 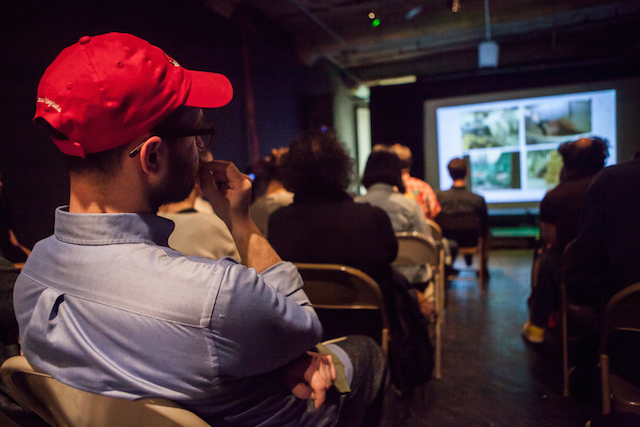 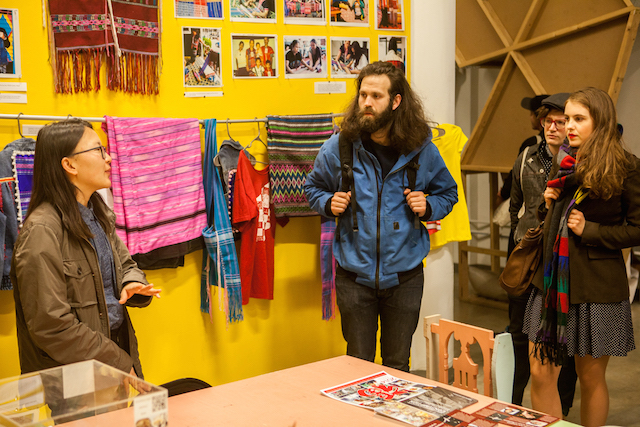 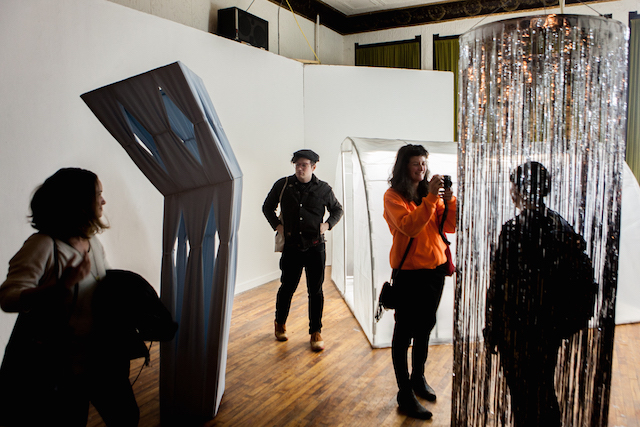 The Fung Wah Biennial is at its best when all of its participants are in transit themselves. The bus ride home is loud, happy, and slightly-drunk thanks to the boxed wine our stewardess is serving and a whiskey bottle someone has brought out of hiding. I tune it all out for a bit with an online mixtape of songs specifically made for the trip. It's all songs that somehow reference birds. Migration. This Biennial stays on message.

With Manhattan in sight and a "Philly Cheese Pill" dissolving under my tongue, I have my most memorable conversation of the trip. It's with artist and independent curator Joshua Caleb Weibley, whose Biennial piece is titled If It's Free, You're the Product! If I'm Playing Alone, Who Wins?. What it really is is Weibley sitting calmly in his seat, playing Windows 98 solitaire on an ancient Toshiba laptop.

"A while ago, I was at a real standstill moment in my life, looking at things and thinking it was a little bit like playing solitaire," Weibley said, not looking up from his game as I sat down across the bus aisle. Weibley described feeling like he's shuffled images and ideas around from one arts group to the next like cards from a deck. It led him to dive deep into the game, specifically its existence on our computers. As he moves cards back and forth he tells me how solitaire was used to train people to use the first computer cursors, and points out that, even today, we mostly engage with computers using the game's same drag-and-drop moves.

"The things we do with our devices to distract ourselves from what life really is—they're all descendants of solitaire," he suggests. "It's a really calming meditative kind of game. I can do this for hours. I have."

We both go quiet. Weibley takes a sip of his beer and makes a few moves on his screen. My phone has stopped beeping by now—the artists performing their break-up have either finished or given up. I can't tell. The Manhattan skyline is visible up ahead and it seems as if we'll be home right on schedule.

What exactly is the Fung Wah Biennial? There's really no easy summation. What I experienced was a somewhat messy day moving between big cities in the company of people willing to think a little longer and get a little weirder with what's usually standard travel procedure. It was playful, unpretentious, non-commercial, and fun. If that appeals to you, then hurry up and book a ticket.

The Fung Wah Biennial will travel to Baltimore this Saturday // Flux Factory will open an exhibit of works made in connection with all three trips on March 25.

#Flux Factory
#Fung Wah Biennial
#Fung Wah Bus
#original
Do you know the scoop? Comment below or Send us a Tip