We spend a lot of time around these parts lamenting the atrocious subway etiquette of straphangers, whether they're tying used condoms to subway poles or spreading their hair all over the seats. But it's also important to look at the flipside of the shame cycle, and commend people for being considerate and bringing joy to other people. And the best way of spreading joy? Bringing a puppy on your commute (or ants, I guess, if you're more of an ant person).

But as we've learned, there are plenty of people who still fuck even this up—people who turn their dogs into etiquette-breaking criminal accessories. Not every dog is a magical dog sent here to sit on the seats like a person!

But we come here to praise good subway behavior: reader Jessica Taylor spotted the pup above on the R train around 7:45 a.m. this morning. "I had the pleasure of spotting this wolfy black fox kit pup on the subway," she told us. "He was very sweet, looking around and putting his nose in people's hair. We [petted] him and he seemed to enjoy it immensely, he was very friendly and so soft! He was also quite frisky with his little pink tongue."

And this is, truly, the best way to transport a doggie on the subway so as to give everyone a chance to say hello and be distracted from the smells and human detritus floating everywhere: "What was so funny was that his front two paws were out of the back pack and the back half of him was in, but he seemed to have no desire to jump out," she added.

But he didn't jump out, because he is a Very Very Good Dog indeed.

Technically speaking, all dogs are supposed to be in carrying cases if they're on the subway (unless they're emotional/service dogs). The most important thing, as far as we're concerned, is that subway riders are taking up the least amount of space possible for their dogs (and allowing for the most amount of person-to-dog interaction as possible—if you're going to bring a dog on the subway, you better prepare yourself for people to want to touch it). So let's take a look at some other examples of proper dog carrying subway etiquette.

If you squish your dog in a bag like a Tetris piece, you're doing fine.

@RyanRosenblatt not from today but here is Subway Dog pic.twitter.com/8uChKo32bh

If you decide to place them inside a small stroller so they can get a sense of what it's like living inside a malaria tent, you're doing great.

Lady pulls stroller next to me on subway. Bummed it's gonna be a loud baby. No it's a dog. My day started FANTASTIC pic.twitter.com/dHk2YKnYGl

If you want to put the dog on your lap (and you know it's well-behaved enough to handle the attention), then go for it.

Normally I would say you probably shouldn't bring your dog on the subway but the butterfly wings make it ok #nyc pic.twitter.com/lTnAc5JX0w

Placing the dog under your seat/feet also seems pretty reasonable to us (especially if they're on a leash):

Helped sneak a dog onto the subway #dafuq pic.twitter.com/WuazpL38K6

Frank the Pug is just a regular dog who takes up too much room on the NYC Subway pic.twitter.com/BV7clP2dXo

Hi Dog, you made my night better! #subwaydog #socute #chillen

But letting the pups spread out all over the train car and on the seats? Probably not cool.

someone brought their dog on the subway im pic.twitter.com/F3p1cV0KKj

Found a giant dog in the subway lol you can't do this in Japan pic.twitter.com/m3D33YqE6R

Because at the end of the day, the best method remains the simplest: stuff the puppy into a shoulder bag, and let its dumb little head poke out to observe the world.

Even large dogs can fit in totes:

I should start a collection of ways people transport their dogs on the subway. #1: Large dog in tote bag pic.twitter.com/2lWxQdhynO

The NYC subway system bans canines unless they can fit in a small bag so... pic.twitter.com/OjTccCvrP2 #Pitbull #dog @CutestAnimalPix

Hell, even a plastic bag can work when you're in a pinch:

Because we can tell you from experience: they're happy just to be there with you. 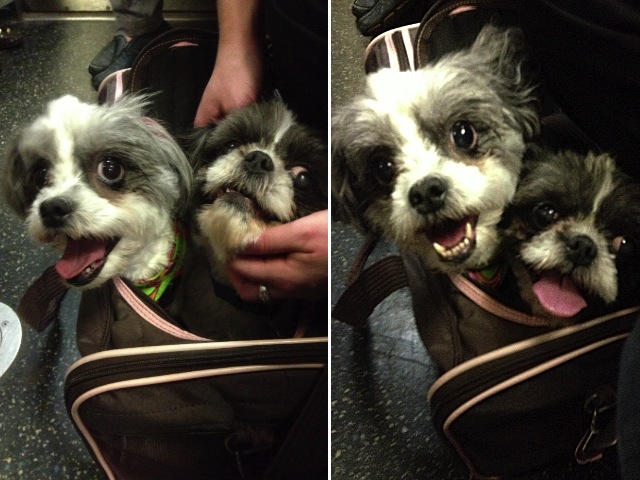 #dog
#dogs
#MTA
#puppies
#subway
#subway etiquette
#trains
#original
Do you know the scoop? Comment below or Send us a Tip
A new Gothamist is coming! We’ve moved comments over to our beta site. Click here to join the conversation and get a preview of our new website.