For this year's exhibit, the Storm King Art Center has put a focus on climate change, with pieces by 17 artists taking over the institution's sprawling 500 acre space. The works aim to "explore the impacts of the changing climate in ways that incorporate scientific, cultural, and aesthetic perspectives... [and] illuminate the threats of a changing climate to our biological world and to humanity." Our photographer Sai Mokhtari called it "beautiful, moody and unsettling." 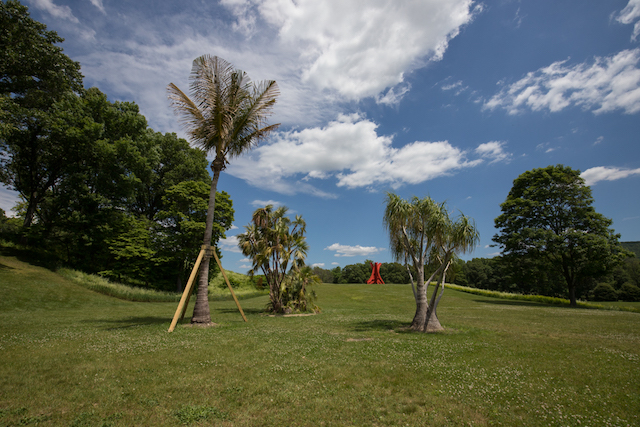 John P. Stern, President of Storm King, said, “From its founding in 1960, Storm King has prioritized environmental projects including land conservation, reclamation of industrial sites for sensitive landscaping for art using native plants, and preservation of wildlife habitat corridors in the Hudson Valley." He further explained that the site-sensitive and site-specific works on display "resonate with Storm King’s mission and history of environmental stewardship and that further the dialogue between art and nature while also speaking to broader issues that affect regional, national, and global ecological health.”

Artist David Brooks cast several natural elements in Storm King’s peripheral wooded areas in bronze—tree stumps, roots, acorns and more "will be in-situ forever," he says, "like fossils detailing this climate moment for future generations and species." Mokhtari notes that the trail is long, and the items are very well hidden—"Even with a map, we were only able to find a handful of them over the hour or so it took us to walk it. Quite the scavenger hunt."

Another project, Dear Climate, "chose to create a rhythmic and ceremonial procession of flags, reminiscent of those at the United Nations Headquarters in New York... The series of banners that invite visitors to reconsider their relationships to species life and climate change."

You'll also find a weathered wooden cabin filled with the trappings of a scientific lab station; a towering stack of tambourines stranded on an island; an interactive weather station; and so much more. An illustrated exhibition catalogue you can pick up while there features texts on each work in the exhibition, which is open through December 8th.

Storm King is located at 1 Museum Rd in New Windsor, NY.. The trip from NYC won't take you too long (via car, bus, or train), typically under 90 minutes one-way.