On Sunday, September 14th, Steven Spielberg filmed scenes for his Cold War-era movie, St. James Place, in DUMBO. We had previously spotted the set as it was being built, but on Sunday everything was in place as Old New York was brought briefly back to life, and crowds gathered around to watch Spielberg & Co. in action. Here's what that looked like. 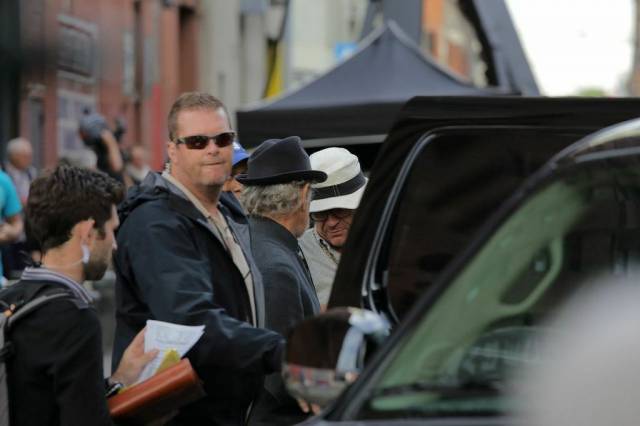 Spielberg's in the black hat. (Photo via vbadikov's flickr)

The movie, which stars Tom Hanks and was partially-penned by the Coen Brothers (they came on board to revise Matt Charman’s script), is based on the true story of attorney James Donovan (Hanks). It's due out in the Fall of 2015.

Donovan was "enlisted by the CIA during the Cold War to surreptitiously negotiate the 1962 release of Francis Gary Powers, the U-2 spy plane pilot who was shot down over Russia two years earlier." During his lifetime, he also negotiated deals with Fidel Castro during the Bay of Pigs invasion, counseled during the Nuremberg Trials, and in 1962 was backed by Kennedy for as the Democratic candidate for a New York Senate seat (which he lost to Jacob Javits). In the late 1960s, he was the President of Pratt Institute.

Yesterday, the movie was filming in Barreto Park in the Bronx (and you can keep an eye on On Location Vacations for future location spots).

#dumbo
#movie
#movie set
#st james place
#steven spielberg
Do you know the scoop? Comment below or Send us a Tip