Photos: Spider-Man Has Been Crashing Cars In Manhattan Today

The Amazing Spider-Man 2, coming out next year—a full decade after Spider-Man 2—has been filming around New York City under the name London Calling for a few weeks now. Today the cast and crew dropped into the Flatiron to film a scene that involves a sedan smashing into the top of a yellow cab (kudos for not using a green screen). A tipster told us this morning:

"They closed Eisenberg's for three days to film inside of it. I happen to be so lucky as to work above Eisenberg's, at 173 Fifth Avenue. THEY'RE DROPPING A CAR FROM A CRANE. No sight of Andrew Garfield or Emma Stone yet."

The real action started just before 3 p.m., when one onlooker snapped these shots of the car being dropped onto the cab, Tweeting: "this was so loud that my dog freaked out when the top car fell." As for the Eisenberg's backdrop, one fan has noted that this is where Mary Jane Watson (played by Shailene Woodley) is a waitress in the upcoming movie... so don't expect to see Emma Stone around there today. 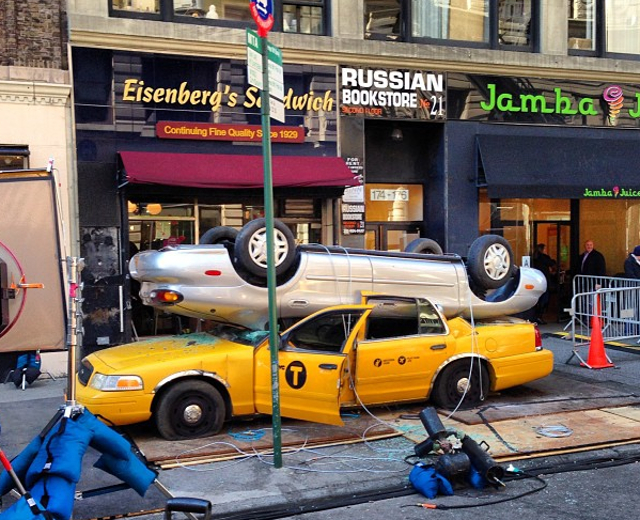 #filming
#hollywood
#spiderman
#spiderman 2
#the amazing spiderman
Do you know the scoop? Comment below or Send us a Tip