A kinkajou that's been on the lam in the Jamaica Bay Wildlife Refuge Center in Broad Channel, Queens has been apprehended and brought in for questioning regarding the matter of HOW IT GOT SO GOD DAMN ADORABLE!!!

The cat-sized mammal, which also goes by "honey bear" (!!!!), was spotted August 13th by photographer Cesar Castillo and has been eluding National Parks Service rangers since last Wednesday, when it was ultimately captured.

The little guy (or gal) had been napping in a tree, "so the capture was easy," an email from Northeastbirding revealed to the Queens Chronicle.

Kinkajous are not native to New York City, preferring instead the heat and humidity of rainforest climates in Central and South Americas. Daphne Yun—the acting public affairs officer at Gateway National Recreation Area, a part of the US National Park Service that runs the Wildlife Refuge Center—told us it's unclear how the animal ended up in Queens, but suspects that someone dropped it there. "I've worked for Gateway for three years and it's the first instance that I've known of an exotic being in [the Center]." 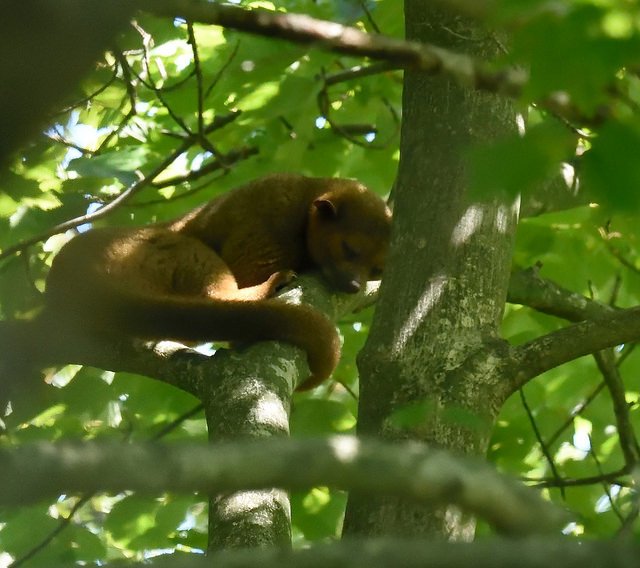 The animal was handed over to Animal Care & Control of NYC, who haven't responded to a request for comment about what will become to the kinkajou now that it's been caught. City zoos have a few kinkajous in residence, so maybe it's time for a new addition at the Queens Zoo? Hopefully this little critter will find a save haven and serve as a reminder that exotic animal smuggling is bad...except when it gives us great television.

#ACC
#Animal Care & Control of NYC
#Exotic Animals
#kinkajou
#queens
#Wild Animals
Do you know the scoop? Comment below or Send us a Tip