The iconic Eero Saarinen TWA Flight Center—which originally opened in 1962—reopened this week with much fanfare. The landmark was shut down in 2001 and has remained shuttered since, sitting like a tantalizing time capsule across from JFK Airport's Terminal 5. The reopening is something to celebrate, as landmarks aren't always brought back to life in such a thoughtfully detailed way. The refurbished interior has remained true to the era in which it was built, and stepping into the long-abandoned space will transport you back to a time when air travel was a little more glamorous... at least, that's the idea. Of course, as we suspected, modern day humans will always be there to ruin everything.

A more realistic look at opening day at the new TWA Hotel emerged yesterday, thanks to travel blogger Max Prosperi, who booked a night there along with his mother, a former TWA flight attendant, on Wednesday May 15th—click through the photos above for what he saw.

Prosperi told Gothamist, "What I believe happened, and this is pure speculation, is that passengers from T5, the neighboring terminal, noticed signage to the TWA Hotel and managed to make their way over to the hotel. They were probably stuck at JFK as a result of delays, cancellations, etc."

The hotel is directly linked to T5 via the iconic flight tubes, and Prosperi says, "There was an obvious lack of employees and security at the airport. It wouldn't be hard for a passenger to sneak up to the mezzanine level of the TWA Hotel (where the mock Ambassador's Club is located) and set-up shop for the night. Airport hotels that are directly connected to the terminal usually funnel arriving guests through the lobby and have security watch for passengers using the lobby as a place to sleep."

In total, he believes there were around a dozen people sleeping in areas of the lobby. But Prosperi says the other issue was that the hotel was not ready to open. 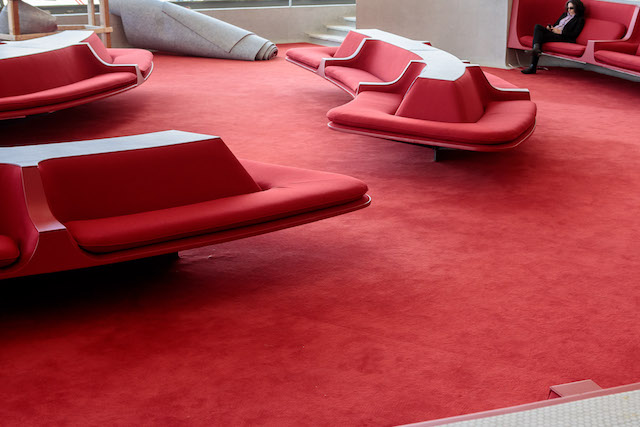 Carpets were still rolled up when the space opened on Wednesday. (Tod Seelie / Gothamist)

The hotel portion of the space was still under construction, with some rooms unfinished. "My room was finished but there were minor details that indicated a rush job," Prosperi says. "The elevators didn't work for the majority of the stay. One of the shelving units was so poorly installed that I couldn't open or close it. Other guests reported much larger issues." Prosperi spent around $350 for a single night, and says, "That's not bad for an airport hotel connected to JFK. However, as much of the hotel was not ready for operation, I did not think the price was worth it. I could see myself paying $150 and having no complaints but at $350, I expected dining options, the pool to be open, the hotel to be finished, and knowledgable staff."

The most disappointing thing, he says, was that the staff—likely put in a tough position as the hotel was not ready for guests—were unapologetic. "They need to train their staff. That was a big aspect. It seemed more like a pop-up hotel than a multi-million dollar permanent structure. It seemed as if [they] really wanted to act as if everything was fine and these hiccups were isolated. They really weren't."

Even the dining spaces were not complete (some parts of the Departures Hall are still not open), and the Paris Cafe appeared underprepared for the number of guests who turned up. Prosperi says, "They said that hotel guests would receive priority status on the waiting list of a table and that we could walk-up [to The Paris Cafe], put our names on the list, and get a table. The restaurant was not accepting walk-ups. I went to the front desk and told them about that experience. I gave them my phone number but didn't receive any follow-up."

Rooms aren’t ready at the @TWAhotel. The hotel opened today, check in started at 3pm and rooms are still not ready. Lots of people being told their rooms are not ready. Mine had boxes in front of it. To make matters worse, no elevators are working. People are needing to walk up. pic.twitter.com/8e9MUnMEkA

Travel writer Jamie Larounis also witnessed the fumbled opening; while he posted a nice photo of the TWA rooftop pool on Instagram saying the place was "stunning," he provided a different look at things on Twitter (and for the Daily Mail), calling the opening a "disaster," and posting photos of the hallways filled with boxes and food, and ceilings with plastic bags covering holes.

Couldn’t have been better timing: “there’s OSHA violations everywhere!” I kid you not, someone just said that across from me at the @TWAhotel. LOL

A rep for the TWA Hotel told Gothamist that everything is running smoothly now, and that the hotel is around 90% finished. We believe in you, beautiful old TWA Flight Center—you'll get there.

#jfk airport
#twa flight center
#twa hotel
#original
Do you know the scoop? Comment below or Send us a Tip