On September 22nd, 1915 there was a dynamite explosion above the 7th Avenue subway station between 23rd and 25th Street. The explosion caused a cave-in, and surrounding pedestrians as well as a streetcar fell into the hole. In the end the street was in ruins, nearly 100 people were injured, and there are reports that between 6 and 25 people died. That day the Waterloo Evening Courier reported:

"The accident occurred shortly before 6 o'clock and more than half of the injured were women and girls on their way to work. There were seventy-eight passengers on the trolley car which dropped 15 feet into the subway excavation when the entire block collapsed. Although the car remained upright it was partly buried under an avalanche of concrete, rails, timber and earth and many of the passengers were severely crushed."

Another report had the contractor saying the incident was not due to carelessness, but "to the loose formation of dirt which we unexpectedly came across." 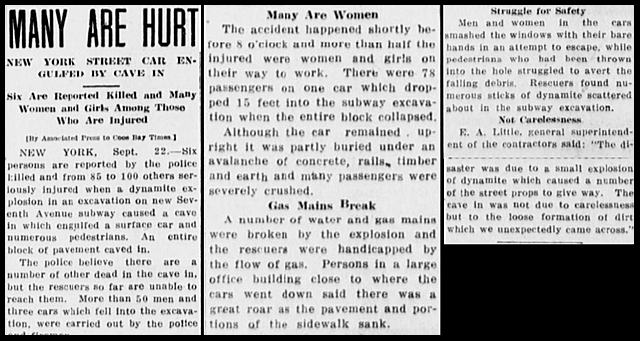 #1915
#accident
#collapse
#dynamite
#flashback
#history
#subway
#original
Do you know the scoop? Comment below or Send us a Tip