Shepard Fairey, one of the most famous and successful street artists in the world, spent four hours out on the gallery floor last night for the opening of his first NYC solo show in five years. Fairey mingled with hundreds of people, signing whatever anyone asked him to, giving out stickers, posing for selfies, and as far as we could tell being gracious and generous with the huge crowds that followed his every move.

The show, which will be at Jacob Lewis in Chelsea through October 24th, is titled "On Our Hands," and it features dozens of new paintings that hammer home the artist's anger and disgust over the corporate corruption of America's political system, and the ensuing environmental neglect and exploitation that is destroying the planet. 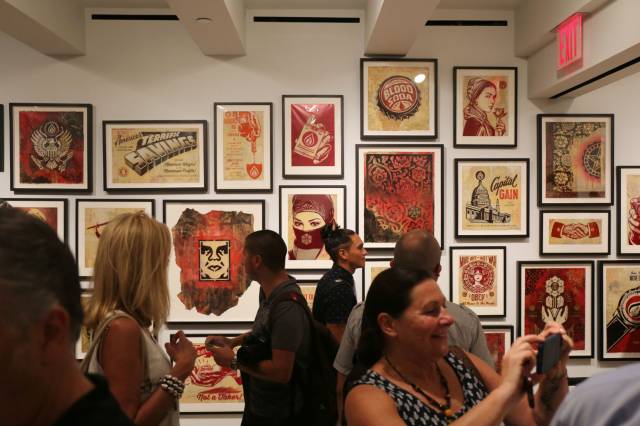 One flight down at Pace Prints, and running concurrently to the Jacob Lewis show, you'll find engraver's plates and test prints of many of the same images, offering an interesting look at Fairey's process.

Fairey first gained prominence in the street-art world some 25 years ago for his "Andre the Giant Has a Big Posse stickers," which led to the Obey logo that became his signature. In 2008, Fairey's Hope poster for the Obama campaign blasted his career as an artist to a whole different level, and today his work has become part of the permanent collection at MoMA, the Smithsonian National Portrait Gallery, and the Victoria and Albert Museum, among many others.

Despite his prominence, Fairey is one of the most friendly, courteous, and accessible artists I've ever seen in action. Most Chelsea gallery show openings last two hours, but Fairey doubled that last night, and spent nearly the entire time swarmed by fans. If he was annoyed by or weary of the relentless attention and requests for photos, signatures, and chit-chat, he didn't show it. (No "freak outs" last night!) 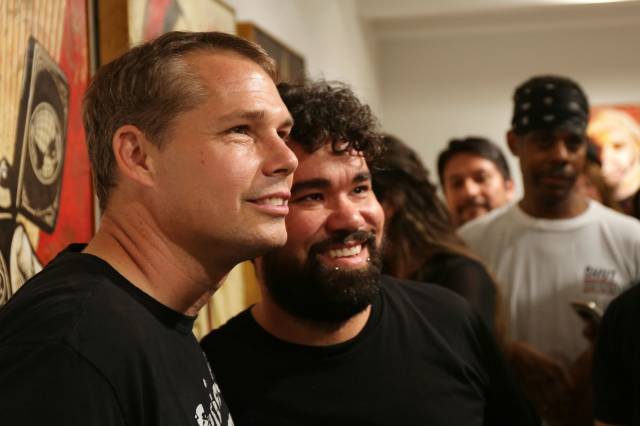 Shepard Fairey's "On Our Hands" exhibition will be at Jacob Lewis through October 24th. The gallery is located at 521 West 26th Street, between 10th and 11th Avenues, on the fourth floor. Pace Prints is at the same address on the third floor.