Al Santariga has seen his fair share of aliens. He’s seen Bigfoot, he’s seen orbs, he’s had encounters with winged demons. On Saturday, he stood in Pine Bush Karate—temporarily dubbed “the Paranormal Center for Interactive Discussions” for the Pine Bush UFO Festival—and held court over a rapt group eager to hear about the time a spaceship parked itself over his house in Yonkers.

Santariga, a postal worker and the head of the Bronxville Paranormal Society, is a big man with neatly trimmed white hair and a white goatee. Around his neck hangs a large silver crucifix, and above that, a small green pouch containing a tiny hunk of moldavite, a type of glass believed to have been formed after a meteorite collided with Earth. At his side sits his co-founder, Bryan Bowden, who is clicking through a series of illustrative slides on a flat screen monitor.

Santariga said he and a friend were sitting outside one evening in the dead of winter, next to a field. A light they’d been watching inch across the sky suddenly stopped moving, and from it dropped three red balls, like an ethereal chicken laying its eggs.

The audience leaned in closer.

“They came down one after the other, they just floated down, got about halfway to the tree line and just blinked off,” he said.

At this point, Santariga said, something told him to look up. He did, and there he sees a triangle craft—a common type of UFO—floating directly above his house. The building is no more than 50 feet high, and the craft is no more than 50 feet above it. It’s completely silent and pitch black, but there’s no mistaking that it was a vessel of some kind.

“It was so close you could see metalwork, the rivets. It was put together somewhere,” Santariga said.

With that, the craft began to float toward the treeline, where it disappeared.

“If I would have blinked my eye, I would have lost it in the night sky,” he said. “Does anyone have any questions?” 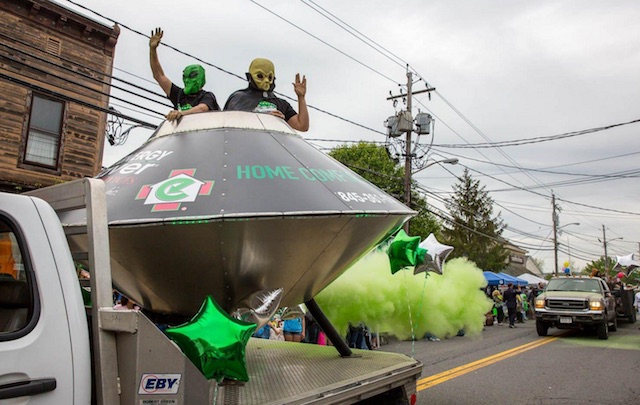 In many ways, the Pine Bush UFO Festival is like any other small town street fair: people sell fried dough from plywood stands, kids hand-dip candles, and couples sway their hips to a cover band’s rendition of “Hey Jealousy.” The difference, though, is that the tables filled with handmade jewelry and handouts from the local rotary clubs are interspersed with offerings of a different kind: tarot card readings, healing crystals, and enough alien kitsch to fill a black hole.

Known among locals as “the Roswell of the East Coast,” Pine Bush has a long history as a hotbed for extraterrestrial activity. Residents of the town, located about two hours north of the city, have been logging reports of bizarre sightings since the early 1900s, though things really took off, so to speak, between the ‘50s and ‘90s.

Hundreds of witnesses claim to have seen everything from boomerang-shaped objects shooting through the sky to strobe lights flashing in the hamlet’s formerly wooded areas. Sightings curtailed sharply in the late ‘90s thanks to rampant development in the open spaces, but by then it hardly mattered: Pine Bush’s reputation as an extraterrestrial salt lick had been firmly cemented for decades.

These days, believers and non-believers alike are happy to capitalize on the alien aesthetic. Locals chow down at the Cup and Saucer, a roadside diner with a sign featuring a spaceship beaming up a mug of coffee.

At a cafe called “All Things Delicious,” owner Kirsten Drossell peeks from behind a strand of Martian bunting. She tells me that local businesses—hers included—try to stay on brand with whatever the rest of the town is up to, whether it’s a season, holiday or, in this case, festival dedicated to space invaders.

“I think it’s good for small businesses to say, ‘Yep, this is what we’re doing today,’” she said, gesturing toward a case filled with dyed green confections. “So these all come down tomorrow. The green cream puffs are only for today.”

I asked her whether she believes that aliens have a particular affinity for Pine Bush. “I really don’t decide one way or the other,” she said. “Yeah, stuff may be out there. And maybe it’s not.” 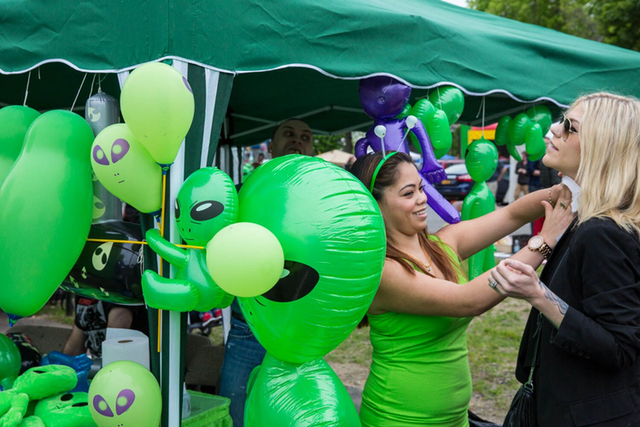 One of the most striking elements of the UFO Fest is the genuine, almost academic approach to considering extraterrestrial life, contrasted sharply with the blatantly absurd—the tinfoil hats, the Mulder/Scully 2016 t-shirts, the bug-eyed alien tchotchkes teeming from everywhere. The event was capped off with the shortest but most enthusiastic parade I have ever seen, with a handful of local businesses going all out on their floats, the same ones they’ve surely dusted off since the festival’s inception six years ago.

A set of Stormtroopers wandered up and down the street, posing for photos with kids clutching life-sized inflatable aliens. Captivating snippets of conversation drifted through the air: ”If evolution is true, there are about 20 missing links,” I heard a guy in mirrored sunglasses say. “If Jesus came down right now, he’d be arrested,” said another.

William Wiand, a ponytailed man wearing a t-shirt tucked into his pressed cerulean jeans, was taking questions underneath a large tent. As a lifelong “experiencer,” he was one of the festival’s marquee speakers, and his presentation had just concluded as I sidled into a metal folding chair.

On the drive to Pine Bush, I couldn’t help but notice the number of “Trump for President” yard signs dotting meticulous, rolling lawns—the candidate won Orange County by more than 50 percentage points. Given Trump’s disdain for outsiders, I wondered how warm a reception aliens could realistically expect from a group intent on building a wall at the Mexican border.

I raised my hand and asked Wiand whether he thought, in the event that aliens made themselves known to us, we would react with hostility.

“Yes,” he answered without pause. “If something enters our airspace, we shoot it down.” He said he hoped that any visitors might conduct some degree of recon before making contact, to ascertain the types of beings Earthlings are and how best to approach us. “You have to feed your soul with love,” he explained.

Kathy Morley, a trim woman wearing a headband featuring two alien heads bopping from wire antennae, was among the group encircling Al Santariga while he recounted the tale of his UFO visit. Her work is in meditation, reiki and hypnosis, though she moonlights as a seer. The first time she was approached by aliens, Morley said, was in the early ‘90s while she was living in Accord, New York.

“They reached out to me, and I reached out to them,” she said, explaining that was given a detailed glimpse of their home planet, down to the plant life. But things got a little out of hand when a group of them decided to move into her house.

“I was scared out of my mind,” she said. Her extraterrestrial house guests remained in her home, watching her, until she threw them out two weeks later. How, exactly, did she do that?

“I told them to get the fuck out now,” she said.

I asked her if she supposed they were friendly. They must have been OK, she replied, since if they weren’t, things likely wouldn’t have turned out quite so well for her.

“They probably would have taken me away, given me an implant, done something nasty to me,” she said. “It’s going to be in my book, but the book’s not ready yet.”

#aliens
#donald trump
#pine bush UFO festival
#UFOs
#upstate
#original
Do you know the scoop? Comment below or Send us a Tip