It's a strange thing to drive out to LaGuardia airport with neither bags nor tickets nor out-of-town guests to collect. It's stranger still to bypass the main terminals, doors in constant motion with competing currents of flyers rushing headlong toward check-in, brushing by recent arrivals stepping rumpled and blinking into the sunlight.

The Marine Air Terminal is set away from all that, beyond unlovely administrative buildings and the dread "lost baggage" Gehenna. You know you're there because the Art Deco building in front of you is striking, with a regal, imposing brick entrance offset by a frieze of flying fish inlaid around the top.

Built in 1939 to accommodate sea planes to adjacent Flushing Bay, time appears to have had little impact on the terminal, which still operates shuttle services between NYC to Boston and Washington D.C. Its original function, though, was to satisfy NYC's desperate need for an airport, thanks to the growing popularity of commercial flights that began to soar in the early '30s (sorry). 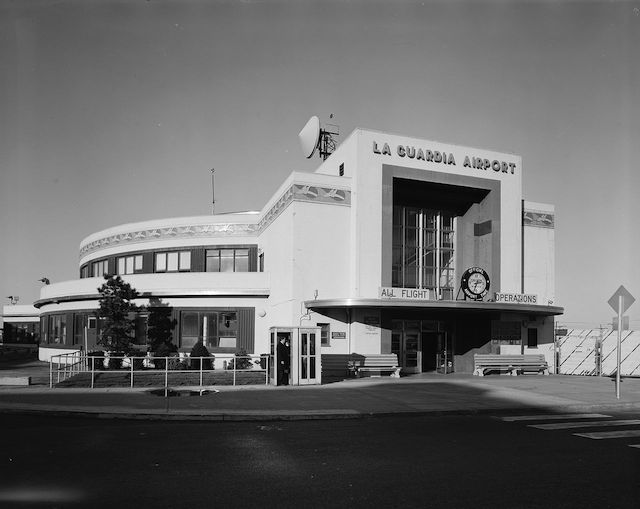 Plans for the federally-funded airport were approved in 1937 by President Franklin D. Roosevelt, and less than a week later, Mayor Fiorello La Guardia was overseeing the project's groundbreaking. At 558 acres with nearly 4 miles of runways, the $400,000 airport was one of the largest and most expensive in the world at the time, considered the "first generation of passenger travel."

The first flight from the terminal was a Pan Am Clipper, which beared little semblance the airborne sardine tins passengers enjoy today. Wikipedia describes the luxury two-deck accommodations as having dining rooms, private compartments and sleeping sections, though World War II brought a swift end to that glamorized era of flying.

The building itself was constructed to resemble the Pantheon, with a stunning skylight embedded in the center of the roof. A 12-foot tall, 235-foot wide mural by James Brooks loosely illustrates the history of flight, though it's possible to sink quite a bit of time debating the significance of each panel. In the 1950s, it was unceremoniously painted over by Port Authority, perhaps because of its vividly socialist imagery. It was laboriously restored in 30 years later by the aviation historian Geoffrey Arend, and rededicated on September 18, 1980.

The terminal was restored in 2004, just in time for its 65th anniversary. It's been on the National Register of Historic Places since 1982.