Recently, a little piece of Harlem's history revealed itself. The wood paneling that has apparently been covering this wall since the 1960s was peeled off, and nearly perfectly preserved pieces fliers and posters from that time were uncovered in the process. The most intact one advertises a show from the AJASS Repertory Theatre Company, which was happening on May 22nd, 1965. Tickets for the event, being held at the King Solomon Grand Lodge, were being sold at both Jazztone Record Shop on 157th Street and Wil's Record Shop on 125th Street.

According to the NCANY, "AJASS not only changed the model of club shows, but the graphic design of the advertising posters that announced the events. Prior to their artistic posters, events usually utilized block type, linotyped letterpress posters that left a lot to be desired."

The wall itself advertises Jack Sobel's Pawn Shop ("entrance around the corner"), which is associated with the Harlem Riots of 1943—"It was learned that the largest single claim was likely to be that of the Jack Sobel Pawn Shop, 145th street and Eighth Avenue, which was looted, wrecked and set on fire. The place was insured for $105,000 with riot coverage included, according to an authoritative source." Here's a photo from outside of the shop, from the NY Times: 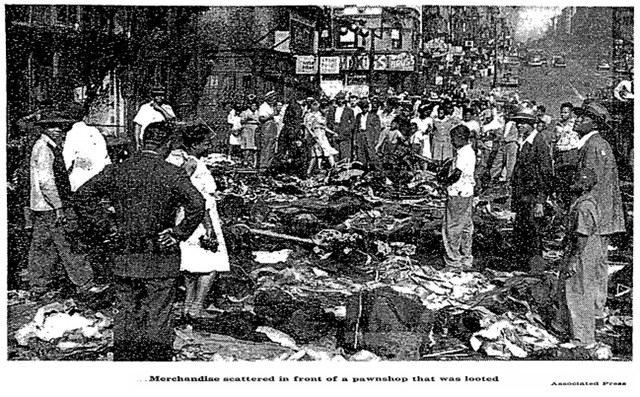 The wall is on 145th Street between Frederick Douglass Blvd and Adam Clayton Powell Blvd, by O'Fishole Seafood.

#harlem
#history
#original
Do you know the scoop? Comment below or Send us a Tip