Twenty years after retirement, their legacy is too tough to die. They’ve already received their own street mural, food truck, and routinely-stolen street sign. Now, New York’s punk godfathers the Ramones will center their very own art exhibit. "Hey! Ho! Let’s Go: Ramones and the Birth of Punk," one of four new exhibits at the Queens Museum of Art, opens on April 10th, just four days after their debut album’s 40th anniversary.

The exhibit is co-curated with the GRAMMY Museum in Los Angeles, where an altered portrayal of the Ramones’ history and legacy will be displayed later this year. “The plan,” GRAMMY Museum director Bob Santelli told Gothamist, "was to come together to create something not seen in the music museum world: two different exhibits on the same subject matter with different viewpoints.” After 2,263 shows across several continents, the Ramones cannot be pinned to one place. Between these bicoastal sites, plus the Ramones Museum in Berlin, Germany, they truly belong to everyone. 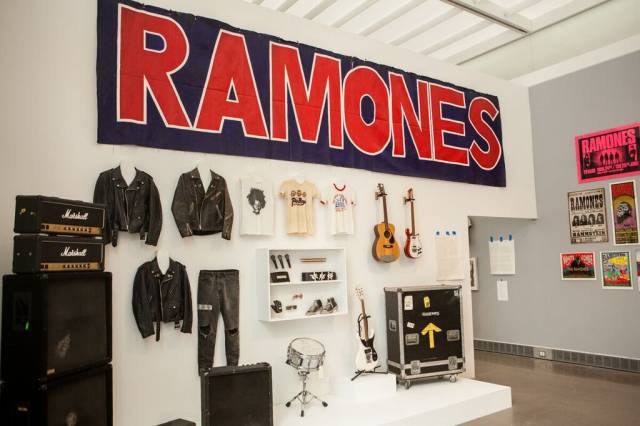 Upon entrance, a sensory overload ensues—because it is, above all, an art museum, Miller’s approach emphasizes the Ramones’ visual charisma being as essential as the music itself. Photographs and flyers from managers and friends, early incarnations of their iconic presidential seal, props from their concerts, zines treating them like comic book royalty… and that’s just the first room.

Visitors can feast their eyes on gorgeous gig posters from tour manager Monte E. Melnick’s collection, the trademark leather jackets and ripped jeans, the imposing Marshall stacks and guitars, and a peek into life after the Ramones: internationally renowned art from the likes of Shepard Fairey and Yoshitomo Nara, plus the personal endeavors of the four original members.

When the exhibit hits Los Angeles, the personal and international influences will be greatly expanded upon, spotlighting the Ramones’ place in a larger context. Linda Ramone, Johnny’s widow, told Gothamist that she hopes the exhibit “will be another great gathering place for Ramones fans. Their legacy is important to me because it was most important to my husband.” It’s important to New York City, too, and though The Met and Printed Matter have exalted punk in their own ways, Queens Museum’s gesture may be the most joyously overwhelming.

"Hey! Ho! Let’s Go: Ramones and the Birth of Punk" runs from April 10th until July 31st, 2016 in Queens. An opening reception will take place on Sunday from 4-8pm. The Los Angeles leg commences in September.

#qma
#queens museum of art
#the ramones
#original
Do you know the scoop? Comment below or Send us a Tip