While residential and commercial real estate developers, brokers and investors sipped cocktails in the lobby of the Brooklyn Museum on Tuesday evening—closing out the sixth annual Brooklyn Real Estate Summit—dozens of local artists unloaded chairs, desks, couches and tables from a U-Haul truck in front of the museum's entrance, and stacked them in haphazard piles on Eastern Parkway.

The truck was plastered with a yellow banner that read "Brooklyn Summit Movers," depicting a person sweating and straining under the weight of a dollar sign. Brooklyn artist William Powhida explained that the furniture was set out on the museum's curb to signify New Yorkers displaced by rising rents across the borough. "We wanted this to be symbolic of displacement in general," he said.

Hosted by the Brooklyn artist collective the Artist Studio Affordability Project (ASAP), Double Crossing Brooklyn was conceived to disrupt the final hours of the Real Estate Summit, and capped off an afternoon of energetic protests at the museum's front and side entrances. For weeks leading up to the summit, artists and community activists had petitioned the museum, urging it to withdraw its agreement to host a third-party event geared explicitly towards "developing" "overlooked neighborhoods" in Brooklyn. 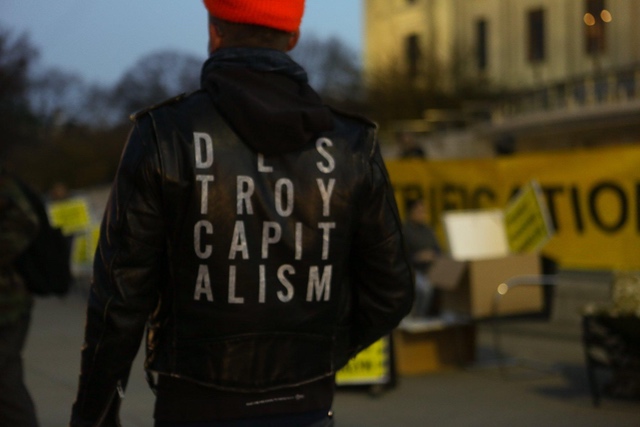 The installation's name is a play on Crossing Brooklyn: Art from Bushwick, Bed-Stuy, and Beyond, an exhibit that ran at the Brooklyn Museum from October 2014 to January of this year, and spotlighted 35 borough-based artists and collectives.

"Cultural institutions have a lot of power. They are key for transmitting information, shaping culture and defining norms," said a spokeswoman for ASAP. "So we're calling on the Brooklyn Museum and other museums to stop providing cover for, and cultural capital to, corporations that are undermining the public interest."

As the sun began to set, artists lined up in a row behind the "curb" of discarded furniture, holding illuminated "BK NOT 4 SALE" signs and a traffic-yellow "GENTRIFICATION IN PROGRESS" banner. Bright-orange miniature tents spray-painted with phrases like "Housing For All" and "They Say Gentrify, We Say Occupy"—created by artist collective Not an Alternative for the museum's upcoming activism-centric show Agitprop!—glowed like oversized lamps.

As cars honked in appreciation along the parkway, artist Dushko Petrovich addressed the crowd, decidedly smaller than the group of protestors that had convened earlier that day.

"There's a culture in this city of accepting [gentrification]," he said. "Of saying 'it's just New York'... and we shouldn't accept that. We should get together with other artists, but more importantly with other communities who have been here longer and who have been fighting harder than we have managed to fight."

Bill Talen, a.k.a. performance artist Reverend Billy, closed out the protest in his white cowboy boots and mock priest's collar. "In this difficult time we have to move into people's definition of what violence is," he said. "We have to move gentrification there."

In response to yesterday's protests, museum director Anne Pasternak stressed that "by renting the museum for this event, we are not expressing opinions regarding the matters discussed in the conference." Pasternak also said that protestors had declined her invitation to send a spokesperson to the summit to tell participants of their concerns.

UPDATE: Despite statements to the contrary from Pasternak, BAN has stated that, "The Brooklyn Anti-gentrification Network was never contacted directly by Anne Pasternak or any other Brooklyn Museum employee."

UPDATE Thursday: Paddy Johnson of the arts publication and nonprofit Art F City was affiliated with the evening protest, and says that Pasternak spoke to her twice over the phone the days leading up to the event. Johnson says that Pasternak also spoke with the NYPD, and helped negotiate an uninterrupted protest. Pasternak did not, however, reach out directly to ASAP's lead organizers.