Team 4heads, the nonprofit organization who have put together the terrific Governors Island Art Show along Colonels Row since 2008, are at it again this week, this time taking over the Federal Hall National Memorial down on Wall Street for an entertaining art fair called Portal.

Some 28 different artists contributed works to the exhibition, all of which is on sale, but for those of you not in the market for a $15,000 sculpture of an old man feeding pigeons, there are still a bunch of fun things to look at and take selfies with, led by Will Kurtz's papier-mâché-looking pieces on the floor of the rotunda. The two police officers, the elderly woman "Nettie" with her walker and cat, the shirtless dude, the raccoon getting up to no good with a garbage can... all of Kurtz's statues grab your attention and reward careful viewing, as he often includes references within whatever scraps of newspaper and magazines layer the exterior. 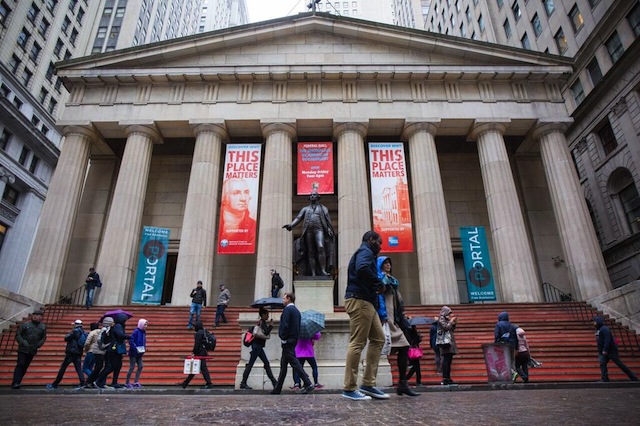 Other highlights of Portal include Maximus Clarke's overachieving 3D portraits which, even though you use only those old-school red and blue glasses for viewing, have more depth and life than some of the VR stuff I've seen; the delicate mobiles, called Form and Emptiness, of Jayoung Yoo, made from floating boxes of human hair; and Jackie Mock's clever—and handsome!—conceptual pieces, like the antique bottles of snow samples (long since melted) from states around the country, and a cabinet containing a year's worth of broken wishbones.

And if the art feels a bit familiar from past exhibitions, it's all still pretty engaging, and the venue is unique and cool (check out the permanent, history-minded installations while you're there). And unlike the big-money markets like Frieze, which is happening on Randall's Island this weekend, admission is totally free. This is a solid lunchtime or weekend afternoon plan.

Portal will be on view at Federal Hall now through Tuesday, May 10, from 10:00 a.m. to 5:00 p.m. daily. Admission is free. Federal Hall is located at 26 Wall Street, at the corner of Nassau Street and across from the New York Stock Exchange.