Photos: Phish Rings In 2016 At The Bottom Of An Hourglass At Madison Square Garden

Serial arsonists Phish burned down Madison Square Garden for the 33rd time last night, blasting 18,000 revelers into 2016 with three sets of upbeat, offbeat improvisatory prog-pop. The quartet last appeared at the Garden on New Year's Eve two years ago, when they celebrated their 30th birthday with a set performed on the roof of their old box truck, after it was driven out into the center of the arena. This year the band drifted even further from their traditional spot, to a surprise second stage at the opposite end of the Garden, playing in a tight circle about 20 minutes before midnight.

Phish is known for their theatrical New Year's Eve stunts—they famously flew through Boston Garden (and later MSG) on a giant hot dog, blasted their drummer Jon Fishman out of a cannon, and brought in a cast of thousands for big choreographed dance numbers and aerial acrobatics. This time around there was an elegant simplicity to the proceedings: they simply played music under a giant upended cone that eventually unspooled a translucent scrim to partially conceal the band, which at this point was locked into a deep instrumental groove at the bottom of a giant hourglass. The effect, with the candy-colored lights swirling around the arena, was kind of sublime. 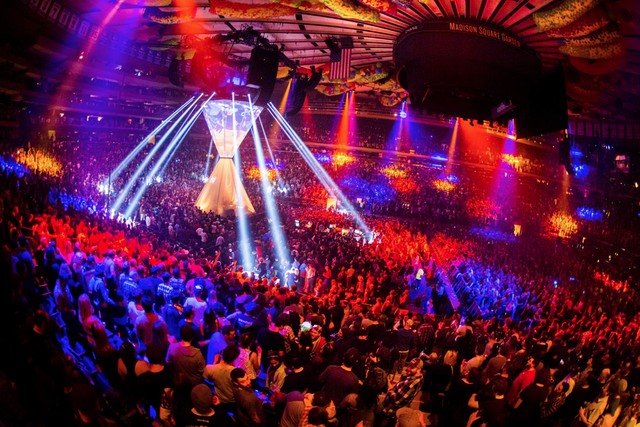 My first memory of Madison Square Garden is still vivid: I was five years old when my father escorted a friend and I down to the city to see the Ringling Bros. Circus. It was also my first time in New York, and all the stimulus of the metropolis was instantly intoxicating for me; just walking the streets felt like plugging into an inexhaustible new power source. The Garden, too, was incredible, on a scale far more vast than any other room I'd ever been inside. At one point during the circus the lights went down—I remember the audience waving thousands of glowing light brushes from their seats, and for me the cavernous arena was suddenly ethereal, transformed with little more than darkness, space, and light. It felt like a dream.

I sometimes think about that night when I'm back at the Garden, where I've seen Phish more often than any other band, probably because they've gigged here so much, but also because they consistently put on an enthralling live show, if you like eclectic post-prog improvisational arena rock with eccentric lyrics and shrewd dashes of jazz, bluegrass, heavy metal, etc.

Moments before midnight, the band shifted back to the mainstage and picked up where they left off, with keyboardist Page McConnell counting down the seconds to midnight, at which point they launched into "Auld Lang Syne" as thousands of multi-colored balloons dropped from the ceiling, evoking a surreal, subterranean sea cave. Moments like these are why Phish can sell out Madison Square Garden instantly: they create the grand, exultant opportunities for celebration that people crave, especially on New Year's Eve, which can sometimes be a tad anticlimactic. Hours earlier, Fishman played the vacuum, then asked the crowd to sing "Happy Birthday" for his teenage daughter.

The concert lasted until 1 a.m., when Phish wrapped up the third set with "Backwards Down the Number Line," a poignant tune about friendship, struggle, and the passage of time. It may sound mawkish, but in the moment, after nearly five hours of propulsive rock and sweaty dancing and weirdness, it was hard to resist the last song's affirmative call to "begin" again, "somewhere in between the past and future, where you drift in time," there in the very first minutes of 2016. In a year marked by so much gloom and horror, there's something vital and refreshing about a brief bubble of escape into more elemental, childlike pleasures of joy and exuberance. I'm technically the same person I was when I was five, yet my everyday perspective on life is obviously completely different. But for a few brief hours, that magical sense of wonder was evoked by four talented music nerds from Vermont. I don't really know how they do it, which is maybe why I keep coming back for more.

Read a more detailed review of the show, with the full setlist, over on Jambase.

Phish performs at Madison Square Garden again tonight (Friday) and Saturday. Tickets are sold out, but the band is also webcasting the shots with a high-quality HD stream here.