The wildly popular beaches at Fort Tilden came back with a vengeance this year following last summer's federally-enforced dormancy in the wake of Hurricane Sandy, and on Sunday the beach was as packed as ever. Yesterday's influx of visitors can partly attributed to the start of a summer-long art show at the park, which began last night with a free performance from Patti Smith, who was joined on stage by a poetic James Franco and a cheery Michael Stipe. 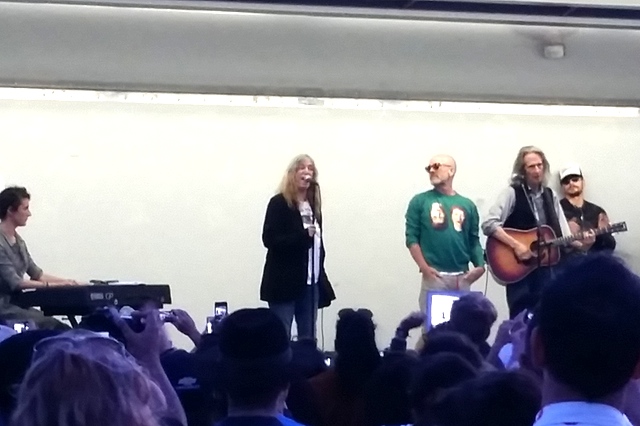 Smith's short set, which got the crowd on its feet for "Pissing in a River" and a set-closing "People Have the Power" (featuring Michael Stipe on backup vocals), was preceded by a reading of Walt Whitman's poetry, with various excerpts read by Smith and a strident James Franco. Certain lines from the poems have been inscribed on stone sculptures now hidden throughout the Fort Tilden grounds. Here's a taste of Franco sampling Whitman:

During her set, Smith also took a moment to rail against a controversial new gas pipeline that's being built under the beach. Here's a clip from the big finale:

The free festival, which is presented by the Rockaway Artists Alliance and MoMA PS1, continues through September 1st, and, all things considered, it's another fine reason to make the trek out to Fort Tilden. While you're there, be sure to check out Smith's haunting installation of a four-post bed in an capacious abandoned building, as well as her moving black-and-white photographs that document the gravestones and mementos of her favorite artists.

And over in Fort Tilden’s military chapel—which was damaged by Sandy and is now being restored—Janet Cardiff has recreated her acclaimed 16th-century motet, "created by recording each member of a choir individually and giving each voice its own speaker." The speakers are arranged in a circle inside the chapel, and the shifting eddies of pristine sound conspire to create what must be one of the most tranquil oases in Queens right now.

If you don't have a car, you can get to Fort Tilden by bike or by catching the Q22 and Q35 buses. On weekends, there is also the Rockaway Beach Ferry, which costs $30 round trip.

#fort tilden
#james franco
#michael stipe
#patti smith
#rockaway
#original
Do you know the scoop? Comment below or Send us a Tip