One World Observatory, the public's chance to catch a glimpse of the view from the World Trade Center (after paying $32) officially opens next week. The observatory has been offering previews to the media, and I can confirm this: The elevator ride up to the 102nd floor, featuring the time-lapse animation of NYC building and rebuilding history, is pretty extraordinary.

Before you get to the elevators, you enter the observatory on the West Street, near Vesey, and descend to a lower lobby. And then there's security screening, followed by the "Global Welcome Center," the first stop in what Legends Hospitality President Dave Kerschner called the "entertainment experience" at 1 World Trade Center. A huge video screen with a world map shows where visitors' hometowns are and also keeps count of the number of visitors who have been there this week and how many are entering at the moment.

Then come a series of halls: The first, Voices, has construction workers, electricians and other laborers who helped build 1 WTC talking about the building's importance. The second, Foundations, has simulated granite bedrock which Kerschner said was based on rock from Central Park and was meant to explain to visitors that only a building like this could be built on a strong foundation like New York schist. A certain Native New Yorker exclaimed, "Wow, this looks fake!" and it did remind me a lot of a Disney ride like The Pirates of the Caribbean.

Fake rock is just a prelude for the two best parts of the visit. The "Sky Pod" elevators take visitors to the 102nd floor in 47 seconds, and if there's one complaint, it's that the ride is perhaps too short! The elevator is lined with screens to replicate windows, and you start out seeing bedrock—but then a panorama of lower Manhattan, in its swampy pre-settler days, emerges, and you witness the transformation of New York from small shipping center to metropolis with billionaire skyscrapers. And yes, there are a few moments where the original Twin Towers are part of the skyline.

On the 102nd floor, you're escorted to the See Forever Theater, where visitors are gathered in a long room and watch a two-minute video about New York City. The theater's screen is made up of panels at different depths, adding a nice dimensionality to a well-produced, energetic "Welcome to New York" video. At the close of the video, the wall and panels dissolve into the ceiling and floor to reveal the view, which elicited plenty of "oohs."

Then the wall closes again and you exit to a landing and head to the 101st floor. The 102nd floor has event space for rent—so if someone needs a chatty seat-filler for your wedding, just drop me an invite.

The 101st floor is where the dining options will be, as well where you can take souvenir photos. If you're just planning on eating or having a drink at the observatory, you'll still have to pay the admission fee, before you get to choose between a "grab and go" counter (there will be sandwiches sort of like Dean and DeLuca, Kerschner explained); a bar and grill a great view facing north; or a fine dining option tucked in the back. None are as big as the old Windows on the World. 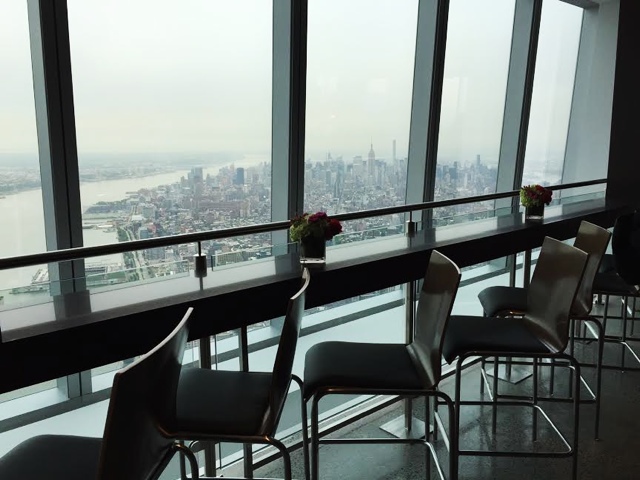 Finally, the 100th floor is where visitors get to see the 360-degree views. One of the One World Observatory guides will take you through its "interactive skyline concierge," City Pulse," which has information about the city, landmarks and activities. There's also a crazy glass paneled circle on the floor, the Sky Portal, that uses live video feeds from outside 1 WTC to simulate the view from 100 stories up in the air.

Most New Yorkers will want to go and soak in the views, which are stunning. However, because it's not an open air observation deck, photographers may have trouble avoiding glares or reflections on the window. Upside: There is free WiFi for an hour, so you can post your Instagram photos immediately.

When you do decide to leave, the elevator ride down has a different animated experience—this one sends you soaring over present day lower Manhattan—and then you're back on the lower level lobby, ready to pick up your souvenir pictures.