We've revisited the Olde Lower East Side before, but somehow have never stumbled upon these photos in the expansive archives of the Museum of the City of New York. They show the Tree Mark Shoe Store, housed inside of a very familiar building: what is now the Bowery Ballroom.

The venue has only been around since 1997, which feels like no time at all for those of us who have seen countless shows there over the years. Unlike its more modern Brooklyn brother, The Music Hall Of Williamsburg, it has always has an old feel to it. In truth, the venue is only 16 years old, but the building has had a long life... and according to historian Matthew Postal, that includes a rocky history. The Bowery Boys revisited it today:

"Using remnants of an old theater at this spot, the current building was constructed in 1928 as a retail store, but the stock market crash the following year ensured tenants never stayed for long. Tree-Mark was home here the longest, almost thirty years.

Tree-Mark Shoe Stores, a family-owned establishment since 1919, was an affordable shoe outlet with three locations in New York by the late 1950s—the original Delancey Street location, one off Herald Square and another on Kingsbridge Road in the Bronx."

It even looked like a little venue from the inside... with seats set up in rows: 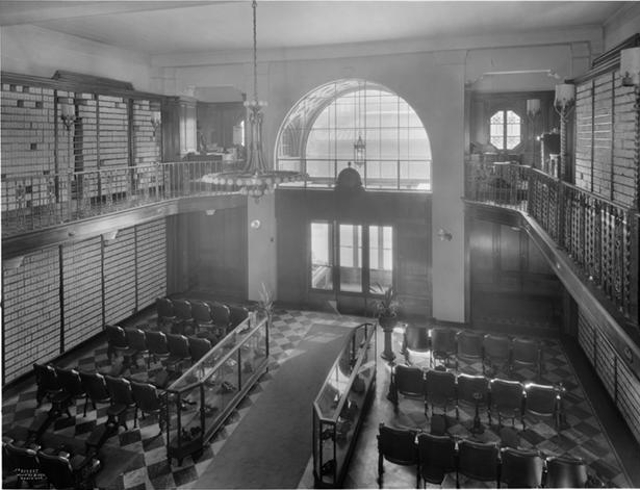 Here's a look at more of the city in the 1930s from our archives, and below a video showing the streets of the Lower East Side specifically during that time:

#bowery ballroom
#delancey street
#flashback
#history
#LES
#tree mark shoes
Do you know the scoop? Comment below or Send us a Tip