Since launching in 2013, they've been getting our meter running—and every year after they've returned with their Big Yellow Taxi Energy. Our favorite local calendar—the NYC Taxi Drivers Calendar—is now back with their 2019 edition, and these captivating chauffeurs are in need of some serious TLC (oversight). Like hearing the Fine Young Cannibals on repeat while waiting on a bathroom line, these cabbies will truly drive you crazy.

The calendar first debuted in 2013, bringing together a dozen of the city's "most scintillating and good-humored yellow cab drivers" to celebrate the hacks who drive our drunk asses home when the subways decide to take the night off. It's also about charity: a portion of each calendar sale goes to University Settlement, America’s oldest settlement house (they say they've raised nearly $70,000 in donations to that end).

The calendar was created by a married couple, photographer Shannon Kirkman and creative director Philip Kirkman; the whole thing got started when they made a 2013 calendar featuring Philip's brother for his wife. "Shannon and I discussed a few other under-celebrated and misrepresented groups and ultimately landed on taxi drivers," Philip Kirkman said. "As we learned more and more about the drivers and industry (90% of drivers are immigrants), partnering with University Settlement was a perfect fit as they were the first U.S. immigrant settlement house (1886) and continue to provide services to immigrants and working individuals and families today." (His brother makes a cameo in this year's calendar as the September passenger.)

As for how they wrangle the cabbies into taking part, "Most of the drivers are referrals from past models and due to the uniqueness of the ask, we go with the first 12 that say yes. So to be cliche, we don’t choose them, they choose us."

Eleven of the 12 hardcore hacks in this year's crew are immigrants, including Alex (Mr. June), who poses with a 10-foot, 40-pound Burmese python, and Alam (Mr. April), who recreates the boombox scene from Say Anything.

Alex, the python holder, was a return model from previous years (he was last year's lollipop-licking cover star). "He’s pretty confident and we knew that there was a strong chance he would be open to posing with such a large snake," Kirkman said. "For new drivers, we’re very attentive to respecting their comfort level, hence the different degrees of undress. Once we’re about 30-45 minutes into their shoot, we and they begin to notice what looks and positioning works best." We can only imagine what was attempted before they settled on Greg (Mr. October) jacking up his nipples with some jumper cables. 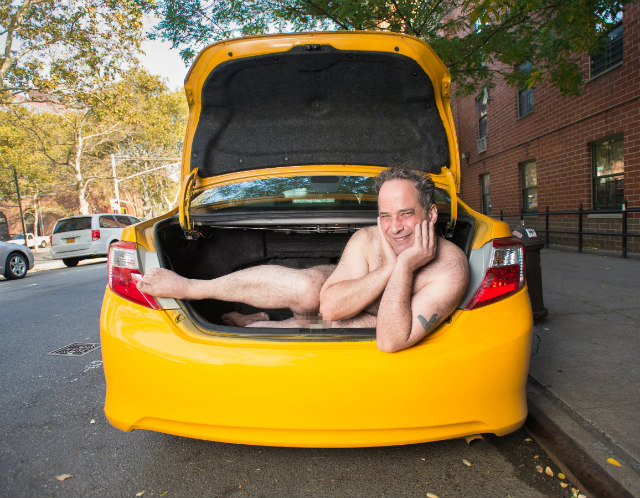 Lastly, we asked them what their favorite photos were from previous years. Philip chose the one above from 2016, which features Dan sensually lounging inside of his trunk. Shannon chose this 2015 classic below, which proves you don't need a Lyft when you're riding with José. 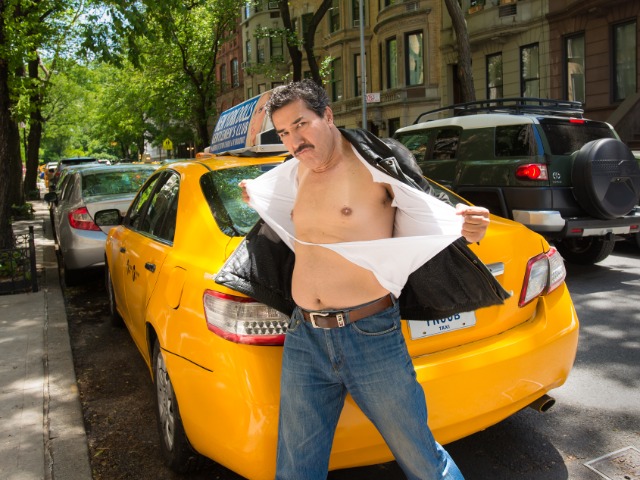 This is the face of 2015 NYCTaxiCalendar

#cabbies
#calendar
#nyc taxi calendar
#sex
#sexy
#taxi drivers
#original
Do you know the scoop? Comment below or Send us a Tip