A week's worth of LGBTQ gatherings and celebrations was capped off yesterday afternoon with the enormous Pride Parade, as thousands of marchers, protestors, dancers, singers, and lovers made their way through from Midtown to the Stonewall Inn.

Spectators packed the sidewalks and side streets throughout the entire route, making it feel like the most crowded Pride in years. (And last year's parade had 2 million spectators!) 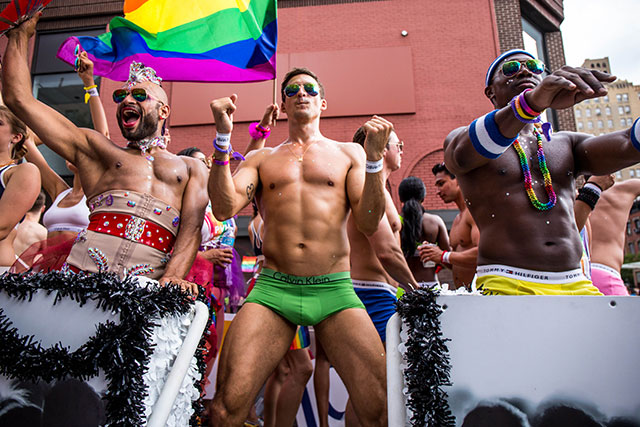 The march seemed more politicized than recent years. The front part of the march was led by numerous protest groups, including Gays Against Guns, Black Lives Matter, the ACLU/NYCLU (which was also a grand marshal and invited Gavin Grimm and Chelsea Manning to ride on its car), and several outraged anti-Trump/anti-GOP and contingents. One group, No Justice Peace, returned later in the day to briefly block the parade near Stonewall, resulting in a dozen arrests. The direct action was intended to call attention to what the group calls "the LGBT movement's complicity with systems that oppress," particularly the march's corporate sponsors and the NYPD. 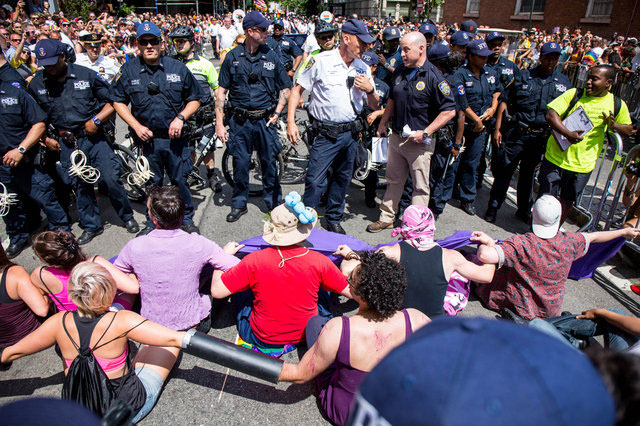 That was after the politicians made their way down Fifth Avenue, a full slate that included Governor Andrew Cuomo, Mayor Bill de Blasio (who with First Lady Chirlane McCray frequently bolted to the sidelines to high-five spectators), Senator Chick Schumer, State Senator Brad Hoylman (who passed out 5,000 copies of the Constitution), and City Comptroller Scott Stringer. No public servant appeared to be having more fun than City Councilman Corey Johnson, who put on an extended show for the delighted crowd with a range of not-bad dance moves.

Once the corporate-sponsored floats started coming, the mood switched over to non-stop party, as freebies were tossed, club classics blasted, and the sexiness-level soared.