America turned 243 yesterday and, once again, New York City threw the country’s biggest birthday party, as millions gathered on the banks (and VIP sections) of the East River to watch the 43rd annual Macy’s Fireworks show.

Four barges floating to the south of the Brooklyn Bridge served as launching pads for the great spectacle, but the hottest action came from the iconic span itself, with fireworks shooting from the neo-Gothic towers and a fiery cascade pouring down into the water (seen perfectly from a subway car crossing the Manhattan Bridge at the time). This feature did cause a small fire, however—according to ABC, "Firefighters battled small flames on the Brooklyn Bridge after the Macy's 4th of July Fireworks show." Flames were reportedly seen over an hour after the show ended. While the FDNY had fireboats at the ready in the river, they were able to put this one out from above. 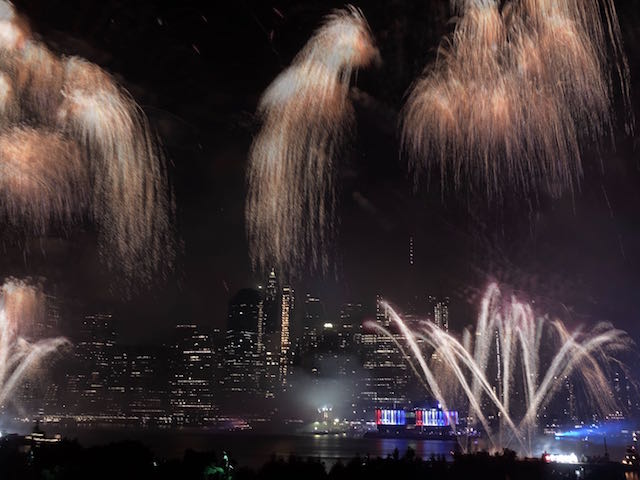 For many, the festivities started long before the 9:30 fireworks. It was a hot summer day and, if you were willing to sit in the sun, you could score some prime seating in Brooklyn Bridge Park and other areas if you got there early enough. Front row spots went faster up on the Brooklyn Heights Promenade, mostly because photographers hogged all the benches by arriving first thing in the morning, staking a claim with their tripod, and then leaving. 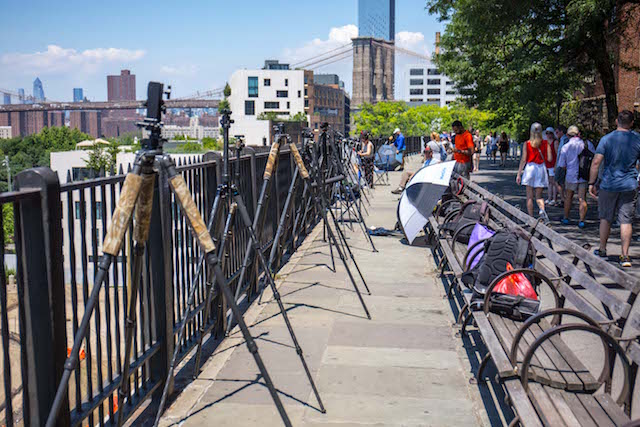 Tripods were set up in prime viewing areas on the Promenade early in the day. (Scott Lynch / Gothamist)

Over in Manhattan, there was a lively cookout scene at Corlears Hook Park and around the Alfred E. Smith housing complex. Closer to the barges and the bridge, the usually packed East River Esplanade was closed to the public by late afternoon (if you got there before then, you could stay), so it was left to the FDR to carry the huge crowds. People poured onto the elevated highway starting at 6 p.m., but it was surprisingly roomy up there. Unsurprisingly, subway chaos followed the show.

Click through for a look at the daytime and evening fireworks scene at all these spots.