If it's summer, it's time for SHARKS. Right on cue, the New York Aquarium's new Ocean Wonders: Sharks! exhibit opens this Saturday, June 30th, so you can check out 18 species of sharks and rays and many other types of marine creatures.

The new $158 million 57,500-square-foot exhibit building in Coney Island—officially called the Donald Zucker and Barbara Hrbek Zucker Ocean Wonders: Sharks! exhibit—has 9 galleries, which the Wildlife Conservation Society says will "will drive awareness of the importance of sharks to the health of the world’s ocean; educate visitors about the severe threats sharks face; and inspire guests to protect the surprisingly diverse and beautiful marine wildlife here in New York." 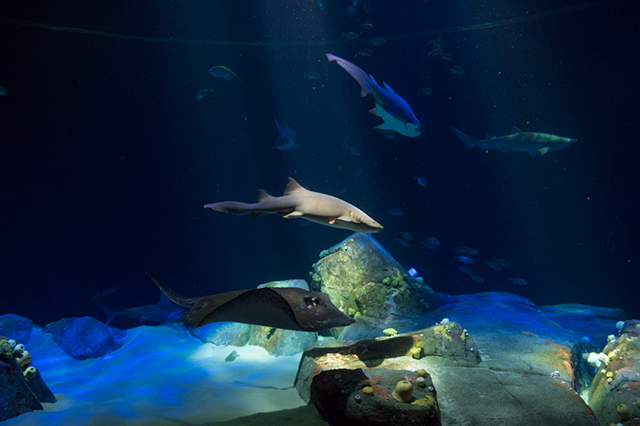 The exhibit is the first to showcase marine life in the New York Bight from Cape May, NJ, to Montauk, NY. Visitors will learn how shipwrecks help ocean life as well as one that gives them a look at the Hudson Canyon. Here's the WCS's description of "Canyon's Edge":

[The canyon is] a marine canyon similar in size and depth to the Grand Canyon, that begins at the mouth of the Hudson River and extends hundreds of miles off shore. Large sand tiger sharks swim slowly into the well-lit foreground closest to the visitor and then disappear into the depths of the seemingly limitless ocean. Currents carefully located on the sandy ledge and directly in front of the viewing area will create resting places for nurse sharks and give visitors a nose-to-nose encounter. Schooling fish and large rays show the richness and diversity of this near-shore ecosystem. The goal of this affective experience is to create a sense of awe and wonder for sharks. Available seating will allow guests a more extended and potentially meditative experience with sharks.

Meditation with sharks—sign me up!

There's also a highly Instagrammable Coral Reef Tunnel, where you can walk through and see fish and sharks amongst the coral reef system. Outside the building, there's an "Ecology Walk" to teach visitors about Coney Island's ecological history, plus the history of nearby Jamaica Bay and Sandy Hook, and highlights local wildlife including birds, sharks, and marine mammals, with stunning ocean views.

The WCS has been active in promoting a deeper understanding and respect for humans' own fragile ecosystem; the institution has also banned all single-use plastic items, like straws, cups, and bags from the NY Aquarium. The WCS is a supporter of City Council Member Rafael Espinal's bill to ban plastic straws; John Calvelli, Executive Vice President for Public Affairs at the WCS, noted that straws are one of the top ten sources of beach litter, observing last month, "The sad thing is that probably by 2050 there will be more plastic, by weight, in the ocean, than fish."