Photos: New Yorkers Shot Each Other With Wax Bullets In the Early 1900s Before there was paintball (which wasn't around until the 1980s), there was the much more painful game of wax bullet dueling! In the early 1900s, those who pined for the days of real duels decided to keep the practice alive, and this was their solution.

Wax bullet dueling started in Paris as a form of simulation training, then came to the States as a recreational sport, where the "bloodless duel" seemed to have established itself in New York City with the help of the Carnegie Sword and Pistol Club and the New York Athletic Club. 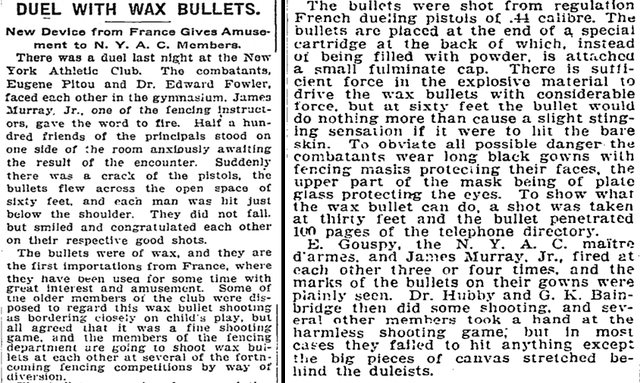 According to Bartitsu, the sport wasn't always "bloodless," however, despite the leather protective garments and face masks the participants would wear—at least one man had a wax bullet go through his hand. The shooter was Walter Winans, who told the NY Times in 1908, "There is a very real danger in this wax, or rather composition bullet, shooting at each other. When I first tired it several years ago, I shot out the soft piece of flesh connecting the thumb and forefinger of the right hand of Mr. Gustave Vouiquin... he tells me it still pains him when he has a lot of writing to do." He also talked about being a believer in a the duel: 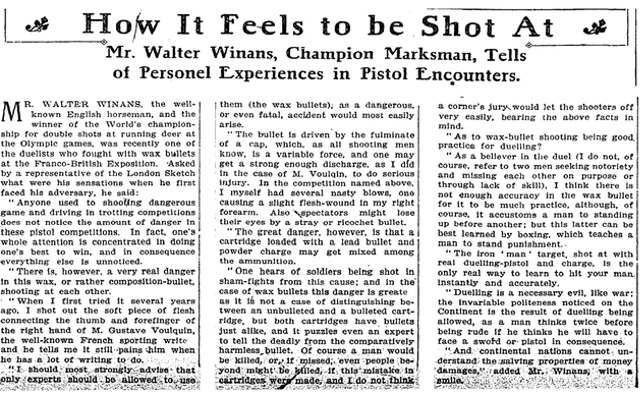 Though Winans would say only experts should try their hand at the wax bullet dueling, the bullets were "widely available on the civilian market and by the early 1900s they were used for indoor practice and in shooting galleries," according to FireArmsTalk.

The photos in the above gallery were taken outside of Carnegie Hall, of "two gentlemen dueling with 44 caliber black powder percussion dueling pistols loaded with wax bullets." Those men were Dr. Graeme M. Hammond, President of the Amateur Fencing League of America and Mr. CB Miller of Columbia University’s Sports Club. The duel ended in a draw. [h/t @NewYorkist]

Photo via the Bartitsu Society

#1900s
#duel
#dueling
#flashback
#history
#wax bullet
#original
Do you know the scoop? Comment below or Send us a Tip