While the late Aretha Franklin's first New York City performance was at the Village Gate on Bleecker Street (now Le Poisson Rouge), one of her musical homes here was the Apollo Theater in Harlem. She first took the legendary stage in 1962, when she was just 19-years-old, as part of the Count Basie revue, returning again and again over her career, including in 1971 for a series of sold-out engagements. The venue has now paid tribute to the icon on their marquee (which is, sadly, digital now).

Following her passing on Thursday, Jonelle Procope, Apollo Theater President & CEO, said in a statement given to Gothamist:

"We are deeply saddened to learn of the passing of Apollo Legend Ms. Aretha Franklin. The Queen of Soul was last on the Apollo Theater stage when we inducted her into the Apollo Walk of Fame and honored her at our annual Spring Gala in June, 2010. Aretha appeared on the Apollo Theater stage more than a dozen times throughout her career beginning in the 60s and was the embodiment of a true legend touching the lives of people around the world with her unique soul-infused voice. Her death marks the end of an era. Aretha’s music was the soundtrack to many of our lives, and each of us has a favorite Aretha song. Aretha Franklin has left us with the gift of an amazing body of work which will comfort us in this extremely sad time in history. Her music will live on through generations."

Fans have been dropping by the Apollo today, photographing the marquee, and leaving flowers and photos by her plaque in the sidewalk outside of the theater. 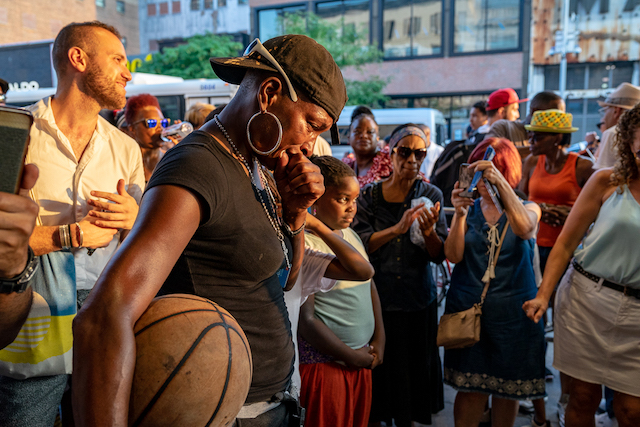 Just prior to her debut at the Apollo, Franklin played the downtown clubs. In an NPR interview, she talked about her early NYC days, saying, "Once I got to New York I was signed to perform at The Village Gate and The Vanguard and clubs like that... The Vanguard was one of the most elite, if not the most elite, jazz club out there." She had also once recalled, "I sang for months at a time down at the Village Gate when I was a very young singer, maybe 17."

In 1961, following a Village Gate performance, a Jazz Report reviewer noted, "She is a shouter and does best on the blues."

Another tribute to the legend has popped up at the Franklin Street subway station in Tribeca.