Williamsburg's newest venue, National Sawdust, will open on October 1st, and it's not trying to compete with the likes of Music Hall of Williamsburg, and it's not trying to tap into a bygone era of Trash Bar. It's a goddamn classy joint. A miniature BAM that looks like a spaceship. A classical music think tank. A creative hub for undiscovered talent. And it's a non-profit. But you know, there will also be a bar and stuff.

Photographer Scott Heins dropped by the 13,000-square-foot space for a preview today, and reports back that the main room has been specifically designed as a space for artists' rehearsals, recording, and live performance—"every last detail of its acoustic-paneled walls, light fixtures, and rafters have been made with music in mind." The main room is both recording studio and music hall, with acoustics fitting for both, and at least eight inches of solid concrete separates National Sawdust's main room from the street outside.

The idea is that the entire artistic process can be brought to life and come full circle in this one space, from the birth of an idea to its first performance. Heins noted that "architects and creative directors hoped to recreate the European classical tradition Chamber Hall commissions, during which composers would write, revise and perform all in the same concert hall." Artists in residence will also serve as curators, bringing in new talent. 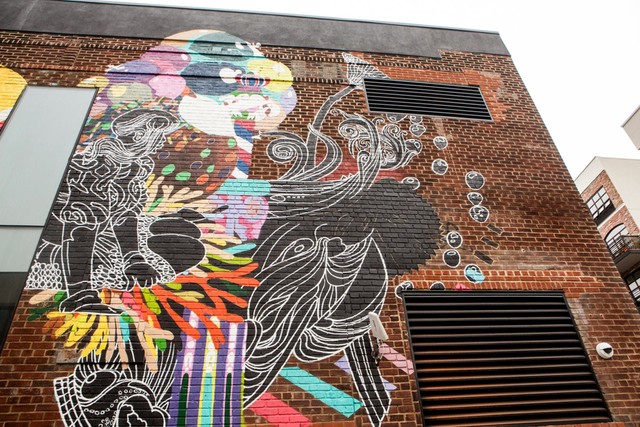 Here's a refreshing statement from composer and director Paola Prestini (who is serving as National Sawdust's Creative and Executive Director): "I know what it means to be a struggling artist in New York City, and what it means to dream big. it's with those principles in mind that we're developing programs, and our hopes are to make these paths just a little bit easier." Rarely do you see a venue that can stand behind a casual mission statement like that.

But what about that name? Peter Zuspan, of the Bureau V design team, addressed the development of the space today, saying that during the construction process they were sent a DVD with black & white silent footage circa 1935. It was shot from inside the National Sawdust factory and sent to them by the grandchildren of the factory's original owners. They hope to commission a new piece of music that soundtrack's that film. Musicians, get inspired here:

The $16M, state-of-the-art chamber hall is located at 80 North 6th Street (at Wythe). The opening night concert on October 1st will include performances by Advisory Board Members Nico Muhly and Heineken's James Murphy.

#brooklyn
#national sawdust
#venue
#williamsburg
#original
Do you know the scoop? Comment below or Send us a Tip