Were you worried that there would not be enough dogs this year at the 28th Annual Tompkins Square Park Dog Halloween Parade, given the last-minute change of venue to the less centrally located East River Amphitheater in Corlears Park? Or that the ESPN broadcast would ruin the grassroots feel of the beloved event? Well, the event was as wonderful as it ever was, thanks in part to the Good Old Lower East Side (GOLES) organization (who took on the insurance responsibility), and to the organizers, led by Ada Nieves, who managed to preserve its character even with all the change.

Sunday's annual spectacle was packed with hundreds of very good dogs in mostly ridiculous costumes, and the new location seemed to work out well for both spectators and handlers alike. It was relaxed, comfortable, scenic... even the dogs seem to like the new spot more, what with all that grass to romp around on.

As always, the outfits varied wildly, from elaborate floats with multiple humans and group themes that took months to pull together, to simple store-bought stuff that was mostly chewed off within a few minutes anyway. And though emcee Katie Nolan did an excellent job keeping up the on-stage banter and entertaining the huge crowd in the stands as dog after dog after dog paraded quickly past, the best part of the day was, as always, meeting the pups before and after their star turn, and the East River Park provided several pleasant, spacious areas to roam around for that.

Click through the gallery above to see just a small sampling of the silly canine costumes on display yesterday, from old school rappers to popes to other animals to superheroes and storybook characters. There were also plenty of food-related get-ups (including hot dogs, some of which were inaccurately topped with ketchup). They were all winners in our book, but if you want to get a look at the official winners, here's a video of them posing with their trophies. 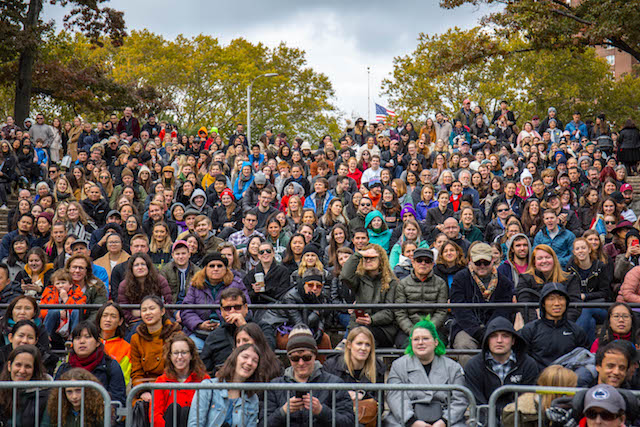 Following the success at the new location, it's unclear at this time if the event will move back to Tompkins Square Park next year, as originally planned.