You remember "Sleepwalker," the hyperreal sculpture of the old man staggering about in his saggy white briefs? The piece that caused an uproar among Wellesley College students when Matelli first unveiled it on their campus? Yup, the nearly-naked guy is back in a big way, anchoring the year-long show and possibly already appearing in your Instagram feeds. 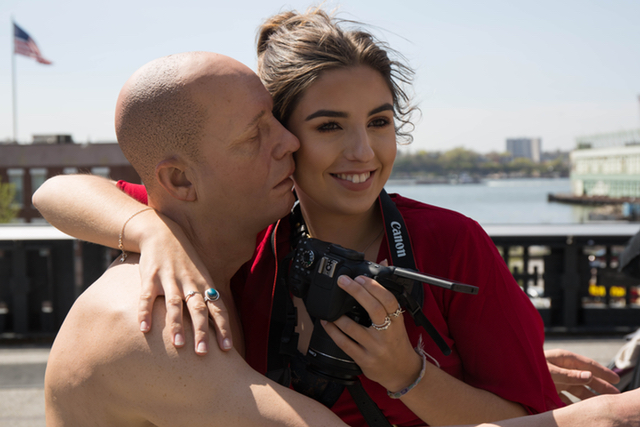 But Wanderlust is about more than a single, admittedly pretty irresistible, photo-op. Mike Nelson gets kind of freaky as well, with a trio of heavy-duty sleeping bags semi-hidden in the undergrowth off the path, each one filled with trash and rubble. If you stumbled across these in the actual wild, you'd probably want to get the hell out of there in a hurry.

Rayanne Tabet's "Steel Rings" jauntily traverse a long stretch of the old freight tracks before crashing into a thick bush. Matt Johnson used one of the High Line's original rail tracks for his Swan, bending the rusted metal into what looks like a big three-dimensional sketch.

Valentin Carron offers "Wall Bell," to evoke community and assemblage, but since the ringer-rope wasn't in place, I couldn't put the piece completely to the test. Marie Lorenz has hung three narrow, decoratively carved rowboats above the Gansevoort Street entrance, which she'll haul down periodically over the summer and take visitors on rides in the Hudson River. For now, though, they're the new cool hangout for area pigeons.

In addition to the Wanderlust, there are two other new large-scale commissions on the High Line, both right off the lawn between 22nd and 23rd Streets. Barbara Kruger's hand-painted typographic mural is an adaptation of a quote by the philosopher and revolutionary Frantz Fanon. And "Smart Tree" by Nari Ward, which wasn't quite finished yet, involves a smart car covered in reclaimed tire rubber with a live apple tree growing up through the roof. If all goes according to plan, the tree will blossom, bear fruit, and then shed all of its leaves during the course of the installation.

All of the art listed above will be on view along the length of the High Line until March of 2017.