Banksy is not back in town, but his unlikely protégé is in our midst. Mr. Brainwash has put up a mural in honor of 9/11, which is located on the side of Century 21 (on Church between Dey Street and Cortlandt Street) across from the WTC site. VP of the store, Isaac Gindi, released this statement about the piece, which was put up legally:

"When Mr. Brainwash came to us with this idea we were honored. We are such big fans of his work and loved the idea of showing our support and dedication for the Downtown community and NYC’s bravest and finest right on our building. His piece exemplifies a tribute to the resiliency of New York City and all Americans after 9/11." 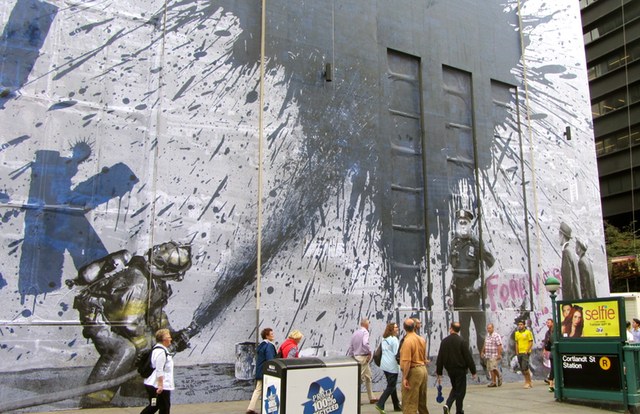 Gothamist in-house street art expert Jake Dobkin had a more critical take: "While I respect the sentiment, and it's always a good thing to honor 9/11 victims, Mr. Brainwash's art still looks terrible. Messy lettering, slapdash paste-up technique, ideas which are always visual cliches. Some people might make the argument that his style is so bad that it's actually good, but that's some next level shit that I just can't get on." Psssshhh, everyone's a critic.

Let's just agree that it's nice to have something like this to look at this week. It has a heart!

#9/11
#mr. brainwash
#mural
#street art
#original
Do you know the scoop? Comment below or Send us a Tip