Photos: MoMA's 1941 Exhibit That Introduced The World To Eames These photos were all taken in September of 1941, during the Museum of Modern Art's Organic Design in Home Furnishings exhibition, which had just opened and ran through November of that year.

In October of that year, Time magazine wrote, "Visitors sat and lounged all over exhibits and pushed them around with impunity. The visitors enjoyed it because they spent as much time on their rumps as on their feet. The museum did not mind because it was doing its best to boost modern furniture out of the fad stage."

The exhibit came after a legendary MoMA competition, which introduced the world to the designs of Charles Eames and Eero Saarinen, who took first place in "Seating" for this chair. (You can still see many of Eames's designs at MoMA today.)

"In 1940, probably due to the widespread influence of his mentor Walter Gropius, Elliot Noyes became the first curator of the new Industrial Design Department at the Museum of Modern Art in New York. That year Noyes organized and presided over the famous competitive exhibition Organic Design in Home Furnishings and published a catalogue documenting the results. On the inside cover Noyes set the competition terms with his definition of Organic Design: A design may be called organic when there is an harmonious organization of the parts within the whole, according to structure, material, and purpose. Within this definition there can be no vain ornamentation or superfluity, but the part of beauty is none the less great -- in ideal choice of material, in visual refinement, and in the rational elegance of things intended for use. 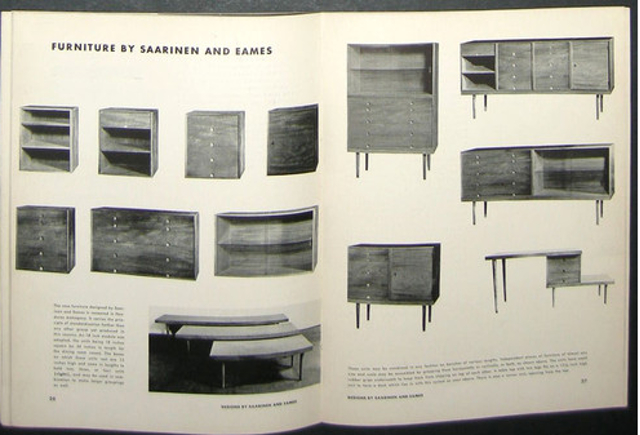 This last statement is telling, because the competition was as much a business deal as a museum exhibit; each of the winning designers was awarded a production and distribution contract with a major American department store. The overwhelming winner of the competition was the team of Eero Saarinen and Charles Eames, taking the two most important categories—living room and chair design—with their innovative method of anthropomorphically bending plywood."

Five years later, the Charles and Ray Eames got their own exhibit at the museum, New Furniture Designed by Charles Eames. (Here's a PDF of the NY Times review—which found "the chair with scrambled legs" to be the most interesting piece of the collection.)

#1940s
#eames
#flashback
#furniture
#history
#moma
#museum of modern art
#original
Do you know the scoop? Comment below or Send us a Tip