"The romance of movies extends beyond the rectangle of the frame."

That phrase, from filmmaker and menswear designer Alexander Olch, sums up the mentality of Metrograph nicely. Olch is the founder of the new two-screen movie theater on the Lower East Side, which opened eight weeks ago with an ambitious program of arthouse classics and kitsch favorites. There's a bias for 35mm prints, a welcoming vibe, and a more recently opened commissary-style restaurant—the movie house is giving cinephiles just about everything they could ever want.

Metrograph looks different—feels different—from the typical Manhattan multiplex. Olch has designed the theater to be a callback to Hollywood's Golden Age, and with its tile-lettered marquee and art deco details, the interior comes across like a film set itself. The decor includes an indoor jungle of plants, and inside each of the two theaters, there's exposed brick walls and plush red seats. There's also a general store-style shelf display in the lobby is filled with candy and popcorn. 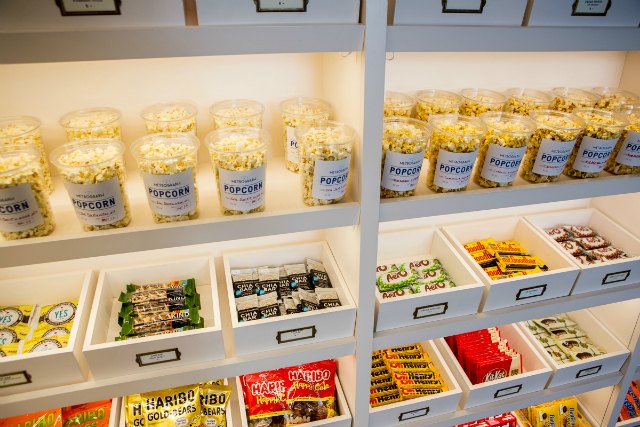 "Everything's been a lot busier than we thought it would be. Our first couple weekends were almost sold out entirely," Olch said as he worked near the theater's small "shop" of cinema and art books. Much of the credit is due to Metrograph's artistic director, Jake Perlin, who has packed the film schedule with documentaries, new wave, noir, and camp films. "Jake's planting a flag and creating almost a new agenda for filmgoing," Olch said. "He's breaking a lot of exciting new ground as far as what's considered a canonical film—a film worth seeing."

"Nothing's off-limits in terms of what we could consider great cinema."

Last week audiences at Metrograph were treated with a surprise: a 35mm print of Radiohead's new Paul Thomas Anderson-directed video, "Daydreaming." How the video came to Metrograph is astonishing: Olch claims Perlin received a mysterious late night message last week. "It said, 'This is Paul Thomas Anderson. I've made a music video for Radiohead, and I'd like to send you a copy.' Obviously, we said yes."

#metrograph
#movie theater
#original
Do you know the scoop? Comment below or Send us a Tip