I have no idea what Mayor Bill de Blasio handed out last year for Halloween (he dressed up as a... mayoral candidate) but the haul at Gracie Mansion was really good—especially for a wannabe health-conscious mom. After telling someone that my four-year-old daughter didn't have any allergies, First Lady Chirlane McCray gave her a bag filled with zero transfat animal crackers, a gluten-free trail mix bar, a reflective LOOK! bracelet and shoe tags, and a big bag of M&M's. "I love my bracelet!" my daughter enthused.

Yesterday, de Blasio and McCray opened up "The People's House" for its first public Halloween celebration. The Mayor's Office had announced, on October 22, that there would be a special "Spooky Walk". The public was allowed to sign up online and registration was closed hours later because who wouldn't want to peer inside Gracie Mansion?

Doors were scheduled to open at 5 p.m., and many families were there at 4:30 p.m. But it turned out that time was actually just for the press, who were taken on an advance tour of the decorated home and treated to de Blasio's grand, costumed entrance. He explained his outfit, which has chest plate and laurel wreath-esque headpiece, "It's inspired by Greek mythology. I supposed it's Zeus-like but the trident suggests something more like Neptune." However, when my daughter and I walked by him (twice), it struck me as being more gladiatorial.

While the press were perusing things, families outside were getting impatient. Children were actually impressively well-behaved, while their parents became increasingly worried that their kids would suddenly have a meltdown because of the wait. Staffers brought out candy AND Vision Zero literature (an activity book for children, as well a pamphlet for adults) for us to pass the time. 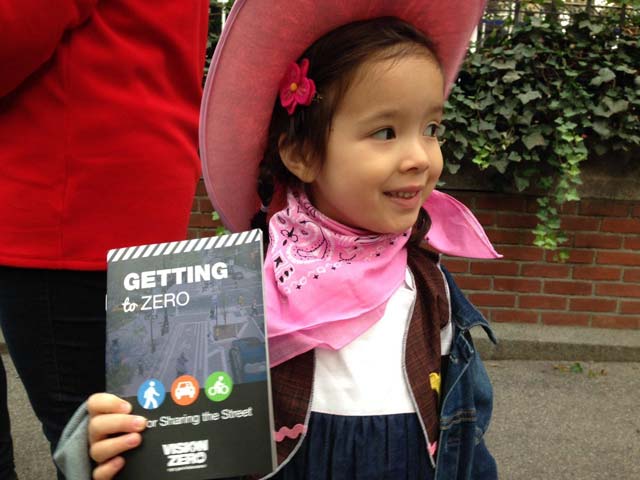 By 5:25 p.m., the kids were definitely getting restless. My daughter started to examine at a rusted bobby pin on the ground, while other parents paced with their kids. Finally, just before 5:40 p.m., the line was moving: We donated canned goods for City Harvest, checked in, and then went through security screening before finally making our way inside the house.

Pumpkins, cobwebs and other Halloween accoutrements set the mood as people dressed in costumes greeted visitors. Everyone was offered apple cider or water by men wearing Dracula capes before entering a stately room where a ghostly woman in 19th century dress recited scary tales as another played piano. Outside, gravestones dotted the lawns, with bones sticking out from the ground as ghouls roamed the lawns, scaring children with, "Wooo-oooo-oooooo!" There were also snacks—caramel apple pieces, grilled cheese bites, cookies and popcorn—as well as signs reminding everyone of the hashtag, #GracieHalloween.

Staffers urged visitors to keep moving through the different parts of the ground quickly, and suddenly we were about to see the Mayor and First Lady. "Does your child have any allergies?" a woman asked—no—and then we were ushered around the porch.

It wasn't even 6 p.m. yet. When we walked back to the front of the Gracie Mansion, I noticed there were only a few people waiting. Since I had made my daughter wait 40 minutes for what was about a five-minute visit, I decided to see if we could go through again. I also had an ulterior motive: I wanted to get a photograph of my daughter with our progressive mayor to troll conservative Facebook friends. And we could—we went through screening again and then took a more leisurely stroll through the mansion. This time, we examined the bones in the Grace Mansion graveyard much more carefully—some metacarpals here, some spinal cord fragments there:

When we made our way the Mayor and First Lady again, this time we were told there would be no personal photos because, logically, that would drag out the whole process if people wanted to pose, take second pictures, etc. Photos would be made available online to attendees later on.

At this point, I felt pretty dumb for being on line again, but at this point, there was no turning back. I told McCray that we didn't need a bag of candy, explaining that we were repeat offenders, to which she said, "I thought you looked familiar!" But my daughter got a high-five from the Mayor, so it was all worth it.

#chirlane mccray
#gracie mansion
#halloween
#mayor de blasio
#Spooky Walk
#original
Do you know the scoop? Comment below or Send us a Tip