Whatever Martin Creed is up to, it's working. The Turner Prize-winning artist has taken over the entire first floor of the Park Avenue Armory for his sprawling and excellent new show. Made up of short films, paintings, a player piano, flashing lights, stacked furniture, a live marching band, and very many balloons, Creed's playful works overpower the Armory's princely atmosphere, turning it into a noisy carnival. He transforms the building's awesome Drill Hall into a schizophrenic cinema and its back corridors into a peep show. It's the largest American survey of Creed's work in history, and he and curator Tom Eccles have dubbed it The Back Door—for obvious reasons.

The centerpiece of Creed's show is his Mouth series, which features short films of his mother staring blankly ahead, opening and closing her mouth to reveal yogurt. Mouth is projected onto a massive screen suspended over the Drill Hall, and Creed has beset it with interruptions. Every two minutes the films stop and the Hall's rear loading gate—The Back Door—opens to let in a small but blinding stream of light.

In case it's still not clear, the intended image is an anus. Martin Creed has turned the Park Avenue Armory into a spectacular rectum like no other.

Elsewhere in a small, bunker-like hallway video screens show women very graphically defecating and forcing themselves to vomit, making it tempting to write off The Back Door as a high-budget display of vulgar nihilism. But Creed's point isn't elimination, it's inclusion, and his works contain as much innocent fun as they do shit. In another portion of the Armory, Half the air in a given space makes it impossible not to laugh as you walk through a room filled with balloons. Just like his songwriting, Creed's visual art is eclectic, upbeat, and unafraid of offending its audience. This is a show with no real rules or boundaries, and thankfully Creed has been kind enough to temper obscenity with child-like joy. 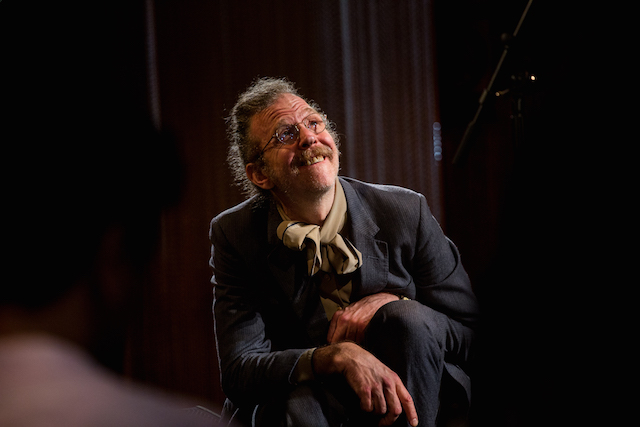 "What people call art, I don't think it has like a clearly defined goal," Creed said Tuesday morning. "I don't really know what I'm looking for but I'm definitely looking for it, and I'd like to try and find it," he mused. "If I find it, I doubt I'll even know."

"I think that life is very stupid, and nature is stupid and just does things for no reasons. It seems very chaotic for me, the world," Creed assured a gathered crowd before launching into a weird folk song about looking for his mother that would make Freud's mustache tingle. "To make up rules... goes against reality."