Photos: Look Inside One Brooklyn Family's Gorgeous Home In 1978 Years ago we visited the excellent and extensive collection of Dinanda Nooney photographs at the New York Public Library. In 1978 and 1979 the photographer shot the interiors of homes in Brooklyn—around 200 total, which added up to 2000 photos of Brooklynites in their natural habitats. The photos were taken in several neighborhoods around the borough, and we thought they were worth a revisit.

Click through for a look at one Bay Ridge family's massive home, which still stands today at 122 76th Street, between Ridge Blvd. and Colonial Road (it even turned up in a NY Times slideshow last year)—where it is "perched on a bluff rising 61 steps" from the street below.

Brownstoner once noted the Gothic Revival home was built in 1900, and in the 1980s it was abandoned, with local kids believing it to be a haunted house.

The home (or homes—The DoB lists a New Building application at the site in 1928, when an additional building may have been added to the property), boasting 14,000 square feet, was eventually separated into apartments (at last count: three). Wonder if that bowling alley is still in the basement...

As far as the family goes, what we do know about them comes from the 1949 Brooklyn Eagle society pages, where an announcement was printed that the daughter of the Elliotts (who lived in the home) had married "John Edward Koechley, of San Francisco, son of Mr. and Mrs. Henry A. Koechley of Bellevue, Ohio." These two eventually took over the home—the photos here are of John and Elinore Koechley and their children. 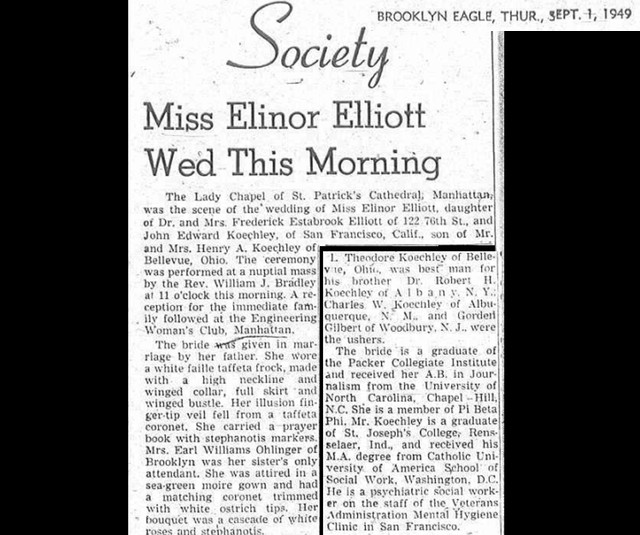 #bay ridge
#brooklyn
#flashback
#history
#real estate
#original
Do you know the scoop? Comment below or Send us a Tip