After a false start in July, artist Logan Hicks spent the last five days (and nights) completely redoing his epic stencil mural on the Bowery Wall. Yesterday afternoon he finished the work, and the result was pretty amazing.

The sprawling, intricate piece is called "Story of My Life," and it depicts what the corner of Spring and Greene Streets would look like if everyone important to Hicks happened to be walking down the same NYC street at the same time. Last spring Hicks had dozens of his friends and fellow artists stroll up and down the SoHo block again and again as he took about a thousand photos, which helped him create a composite sketch.

The faces include Martha Cooper, Chris Stain, Sara and Marc Schiller of the Wooster Collective, Eric Hayes, Rosie Perez, Elbow Toe, Joe Iurato, London Police, and Lori Zimmer, who curated the mural for landlord Goldman Properties. Hicks also put loved ones and close friends in the piece, including his mother and his nine-year-old son, who's depicted three times. There are also random passersby in the scene, people who happened to be in Hick's photos and stood out somehow to the artist. 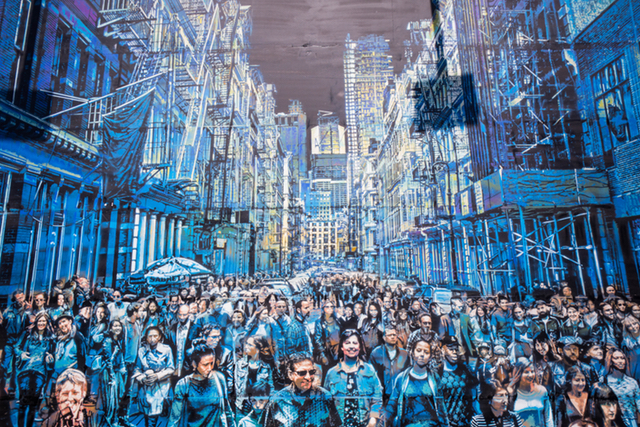 "Story of My Life" was varnished last night to protect it from tagging, and is slated to be up on the Bowery Wall (at the corner of Houston) for about three months.

#bowery mural
#logan hicks
#original
Do you know the scoop? Comment below or Send us a Tip