Photos & Locations Of Nearly All Of Invader's New Mosaics Unlike his "residency" here in 2013, when he ran afoul of the NYPD, Invader's latest visit was heavy on pieces put up with property owners' permission; many of the mosaics even function as complementary signage for surrounding businesses. He also included a number of NYC icons in the mix, including a six-foot-high Joey Ramone, Andy Warhol (with matching invader), and Lou Reed. Woody Allen also made the cut, but was quickly defaced, though it's unknown if this was a result of a clumsy theft attempt or targeted vandalism in response to the auteur's controversial past. 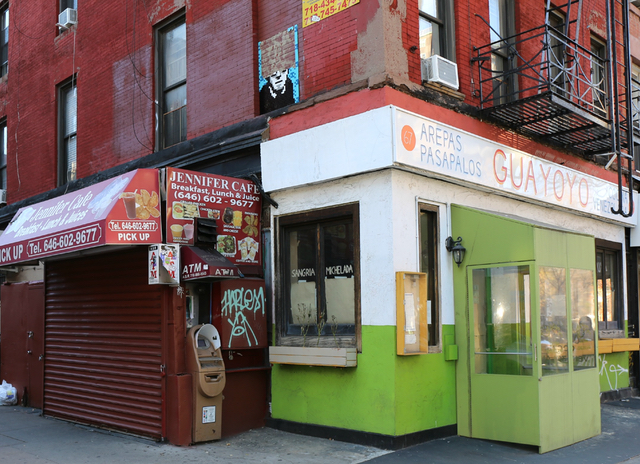 Some street art watchers were disappointed by Invader's primarily street-legal approach, but it did enable him to openly climb on ladders and hang these pieces high, making them more difficult to steal. More difficult, but not impossible. In Chinatown, for instance, a man was trying to install plastic shielding over the row of invaders and jewels above his windows, a couple of which had been destroyed by thieves. Thieves are far more likely to break and ruin these than successfully pry them from the wall in one piece.

Click through the gallery for photos and locations of nearly 30 of Invader's new mosaics.

#invader
#space invader
#street art
#original
Do you know the scoop? Comment below or Send us a Tip