Street art aficionados, rejoice: Banksy is back in town and, according to his website, he's "attempting to host an entire show on the streets of New York."

His website, banksy.co.uk, redirects to banksyny.com. The show seems to be called "Better Out Than In: An artists residency on the street of New York" and a Paul Cezanne quote is featured, "All pictures painted inside, in the studio, will never be as good as those done outside." There's also an 800 number for people to call—800-656-4271—where they can enter the number next to the pieces for more information (it's predictably tongue-in-cheek).

This piece, which is referred to as "The street is in play," is in Chinatown, per Street Art News. Gothamist's resident street art expert Jake Dobkin said, "This is exciting—there hasn't been any good street art in New York in a while." Pointing to his GrafRank of NYC, Dobkin added, "You can see it's been pretty quiet. Some Shiro and Hottea, but nothing major."

In 2008, Banksy completed a huge mural in Soho and had a show in a pet store in the West Village. In 2010, he hit New York again and was soon dissed!

UPDATE: We checked out the area, and can confirm the piece is on Allen Street between Hester and Canal. Gothamist in-house graffiti expert Jake Dobkin explains, "The goal of this coverage is to blow up Banksy's spots as quickly as possible so local graffiti artists can go tag them."

The artist/manipulator, who has a new piece in LA, is extremely mysterious. However, this is was one rumored photograph of him from 2010: 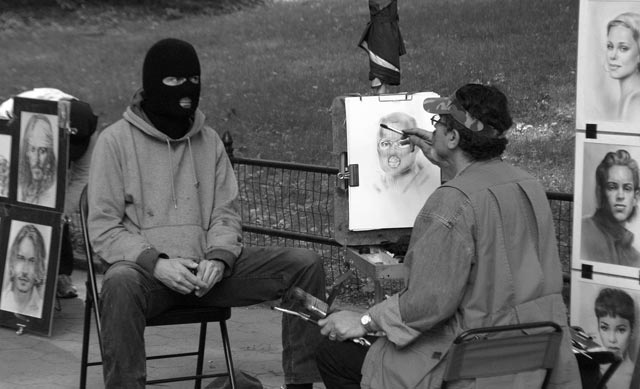