Demonstrators once again broke the calm of the Guggenheim Museum last night to protest the institution's ties to the dubious labor practices that affect the work force who will build their satellite museum in Abu Dhabi. For their fourth act, the protesters hung art that called out the Guggenheim's trustees by name, and attempted to unfurl a banner on the ground floor but were quickly ejected by museum staff.

"No justice, no art!" one protester shouted before being corralled by security, which was noticeably heavier than on previous pay-what-you-wish Saturdays. Guards tore down the protesters' art almost as fast as they could hang it. 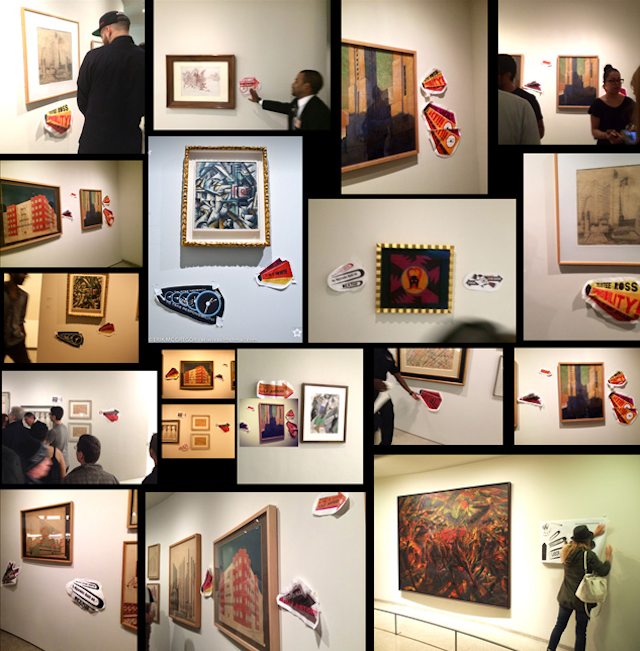 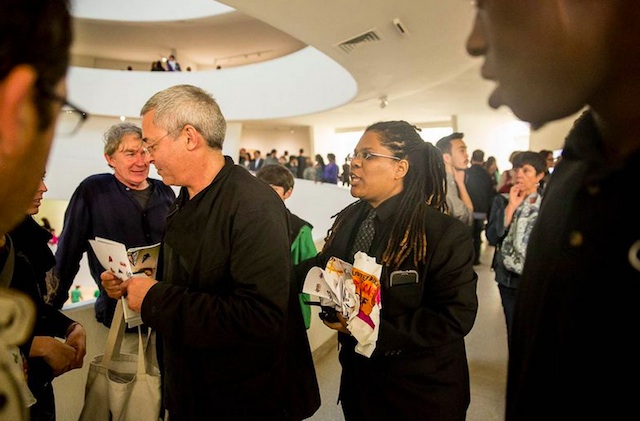 Guards ripped the art off the walls (Tod Seelie / Gothamist) 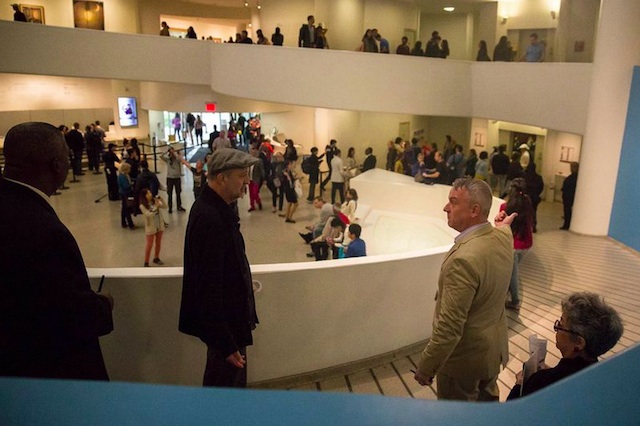 A protester is ejected by museum staff (Tod Seelie / Gothamist)

After the demonstrators were kicked out, the museum staff lingered outside, taking photographs of reporters and pointing out individual protesters to the police, who seemed nonplussed. 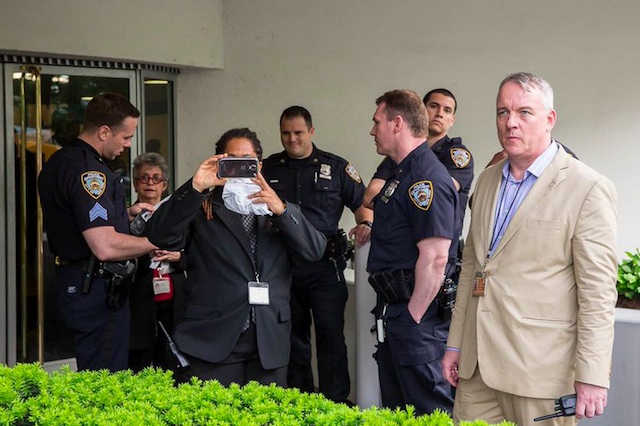 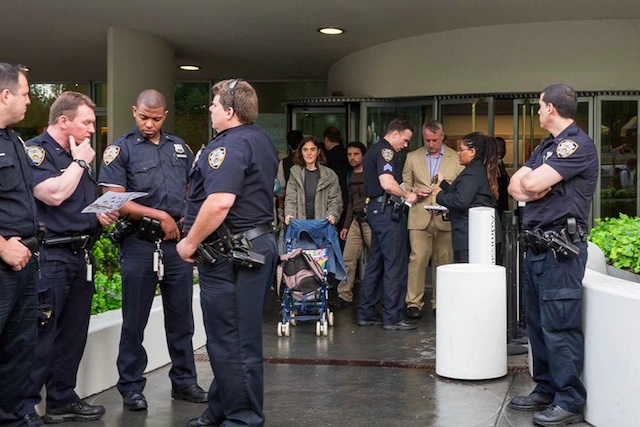 Jamie Lee, a student at Frank Sinatra School of the Arts who was visiting the museum and picked up a flyer distributed by the protesters, seemed ambivalent about the demonstration. "What can you do? I don't think this is really clear on what we should do. You know, put it out on the internet, make a Kickstarter—something." Lee said. "Then again, I know about it now and I didn't before."

The museum also distributed a statement minutes after the brief action ended, calling last week's A1 story in the Times about the squalid conditions and indentured servitude faced by laborers who worked on NYU's campus on Saadiyat Island "disturbing."

"We have made it clear from the beginning of our involvement in the Guggenheim Abu Dhabi project that strengthening labor protections is a top priority as we work in partnership with the Abu Dhabi government to create an institution that will be culturally transformative," Eleanor Goldhar, the museum's deputy director and chief global communications officer said in the statement.

"The museum's been in denial. All they've done so far is deflect responsibility," said NYU professor Andrew Ross, a member of Gulf Labor. Ross was part of a group that recently visited Saadiyat Island and issued a report [PDF] that challenges many of the museum's claims, including one repeated by Goldhar yesterday that "construction on the Guggenheim building itself has not yet begun."

"A good deal of work has already gone into its foundation pilings and the massive surrounding infrastructure without which the building will not stand," the report reads, next to a photograph of the construction site. "The conditions of work and housing on the museum sites are being determined right now." 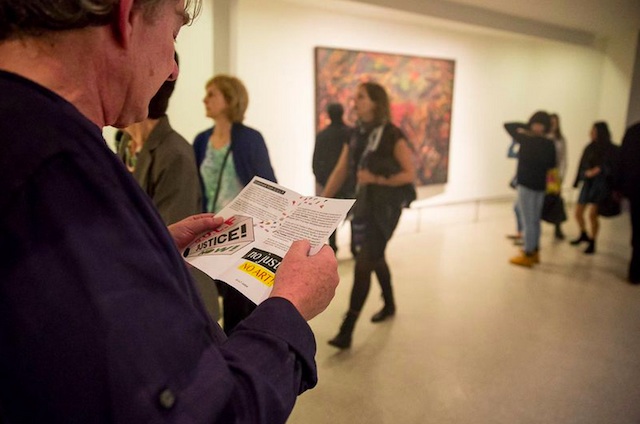 The report parallels the Times' story in that "the topmost grievance expressed by workers concerned their depressed wages." Nearly all of the laborers, many of whom come from Bangladesh or Pakistan, pay exorbitant recruitment fees, some in excess of $3,000, to work on the projects being commissioned by the UAE on Saadiyat Island. After paying down their debt, many are lucky to earn more than $200 a month to send home to their families, while they live in cramped, vermin-infested shacks.

The report recommends creating a living wage for the some 6,000 workers, as well as a one-time "relocation fee" of roughly $2,000 per worker to end their debt cycles—these suggestions seem modest given that the UAE is the third-richest country in the world. The contractors employing the workers effectively spend more on their housing than their wages.

"It's not a question of money, it's a question of power," Ross says. "They won't give in because they need this permanent underclass to be docile and obedient. No one would work under these conditions unless they were paying off debt."