This weekend, Flushing's Skyview Center saw a two-day-long, grand-opening celebration of Daiso, a Japanese dollar store famous for its ever-changing inventory of fun, cute items that, apparently, has spawned a whole sub-genre of "haul" videos on YouTube. They had to shut the line down early on Friday evening (around 7 p.m.) so that everyone could get in before the 9 p.m. closing. One bigwig on site said "thousands" had waited on line that day.

The shop's popularity was apparent as a line formed each day outside. Vicki made the trip out to Flushing from her home in Sunset Park, arriving on both Friday and Saturday mornings at 6:30 a.m. She didn’t want to give her last name because she had called in sick to work both days.

Sarah, Rosanne, and Selina got here at 7:30 on Saturday morning, traveling by subway from the Bronx where they live near Yankee Stadium. And first on line on Saturday was a Flushing teenager and her grandmother, who had been waiting since 5:30 a.m., before the mall even opened (meaning they had to stand outside for half an hour first). Part of the opening weekend insanity here over the weekend was undoubtedly driven by the free goodie bag given to the first 100 customers on both Friday and Saturday.

There are some 2,800 Daiso stores in Japan—it began as "100-yen" street vending shop in 1972—and more than 4,000 total around the world, but this one in Flushing is the first ever on the East Coast. 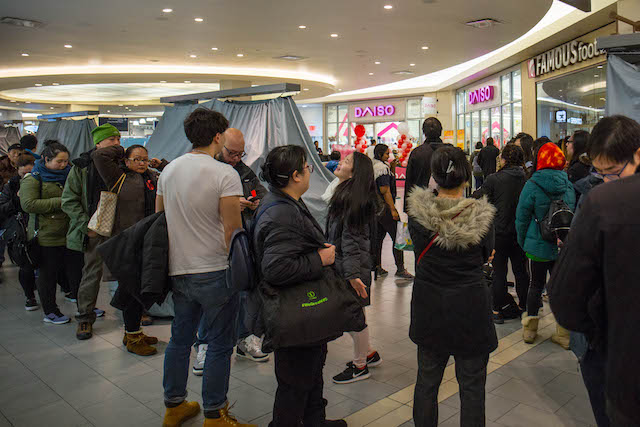 Daiso is located on the second floor of the Skyview Center, 40-24 College Point Boulevard at the corner of Rosevelt Avenue, and is open from 10 a.m. to 9 p.m. Monday through Saturday, and until 8 p.m. on Sundays. Presumably at some point it will function like any other store and you can just walk in without waiting on line.

Here is one of the many, many, many Daiso videos on YouTube telling you about the best stuff to buy there: