Photos: Inside The Central Perk Pop-Up, Temple To Friends Nostalgia (And Free Coffee) Tomorrow, a re-creation of the Central Perk cafe from Friends will open to the public, full of props from the hit sitcom and free coffee. In other words, could this be anymore nostalgic? And could I feel any older?

The pop-up is to celebrate the 20th anniversary of Friends' premiere. James Michael Tyler, who played Gunther, the manager of Central Perk, will be on-hand for select appearances. He told us that he bleached his hair for the first time in 10 years—the show ended in 2004—to "reprise" the character for the event.

When Warners Bros. approached him, Tyler said the anniversary caught him by surprise, "My whole concept of time has been that it's 10 years since it ended, and, wow, it's been 20 years since it began!" He said, "I fully embrace it… I was a minor character on a major show." Then he looked down at his lime green shirt, "Now I'm wearing loud shirts again." But only Gunther was brave enough to confront Phoebe's oversharing boyfriend:

Tyler, who still acts and is also working on an animated feature screenplay and TV pilot ("a dark comedy"), isn't sure if the exact concept of Friends would work with today's audiences, since it's "a different world" now, driven by smartphones and social media and not necessarily meeting up IRL. However, he said, "The characters are universal." Also, his favorite episode is The One With The Prom Video:

If only Ross could see into the future, the future where his East Village neighbors would hate him.

As you take in the paraphernalia, you can drink coffee courtesy of Eight O'Clock, but in paper cups—the huge, oversized mugs that could fit on an infant's head are available for sale for $20. There are also bracelets ($29-32) with charms like the orange couch, a smelly cat and a speech bubble with the words "How you doin'?" According to a press release, the bracelets are "all designed to bring back the happy times fans shared while watching the series." So the real question is: What kind of Friends super fan are you if you're not buying a $13 iPhone case? Also, did any of the Friends have cellphones? And were they aware of Brooklyn? And why was the apartment so freaking huge?

Fine, the "You are my lobster" bracelet is kinda cute. 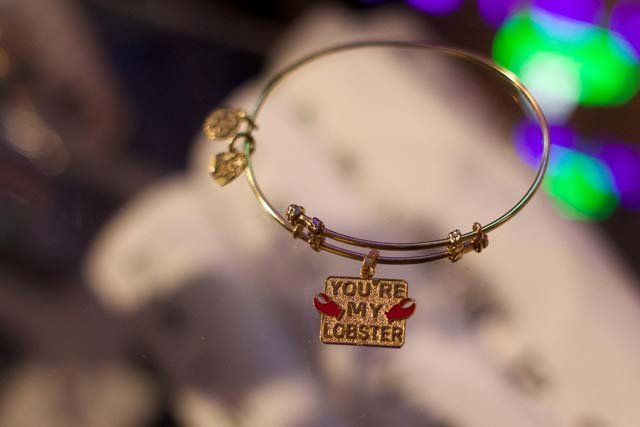 The Central Perk pop-up is located at 199 Lafayette Street (at Broome) in SoHo, and will open Wednesday, September 17, and will remain open through Saturday, October 18; its hours will be 8 a.m. through 8 p.m. Monday through Friday and 10 a.m. through 8 p.m. on Saturdays and Sundays. There will be contests and giveaways throughout the pop-up's run, with prizes like the complete Blu-Ray and DVD setsCentral Perk Roast from Eight O’Clock Coffee, etc.

#CEntral Perk
#friends
#pop-up
#tv @feature
#original
Do you know the scoop? Comment below or Send us a Tip