Photos: Inside The Box Trucks That Briefly Transformed This Queens Street Into An Immersive Art Experience New York is a dense city of channels, pockets and corners. Particularly in its more industrial areas, a lot of those tucked-away places tend to be overlooked at night, after the day’s work is done. Within these temporary unnoticed margins, the empty streets can become a playground for those looking for a little more space, a little more privacy, a little more art.

A decade ago, a group of event producers and experience designers got together to throw a "one-night-only" collection of interactive installations housed in the back of rented box trucks on a quiet industrial street in Brooklyn. Ten years later the tradition is going strong, even expanding at one point for a cross-country summer tour. This past weekend, the newest iteration of the event materialized deep in Maspeth, Queens, creating a collection of quirky surprises and experiences shared with strangers in somewhat small, intimate spaces.

One of the things that makes the Lost Horizon Night Market unique is that it is essentially an open-source idea. With this model, you find a broad mix of different levels of production, depth of concept and interactivity. It’s also still free and fundamentally “underground,” with no Facebook page or other standard way to follow upcoming events, and still operates heavily on old-fashioned word of mouth. 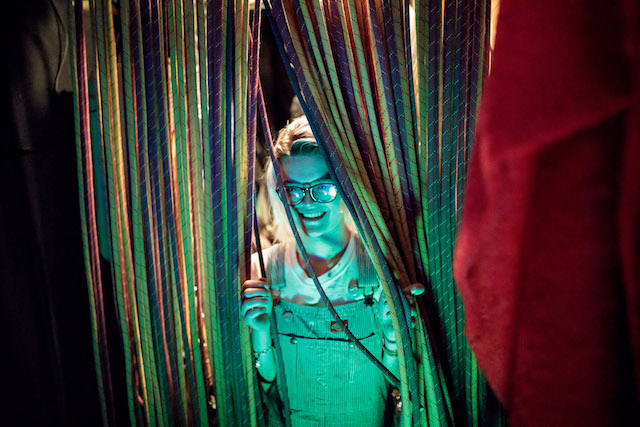 Some trucks this year were simple and fun: “Cantina Camión” offered salsa dance classes in a truck decorated to look like a restaurant, with a DJ spinning a mix of salsa, bachata, reggaeton, and pop in the back. The “Human Car Wash” was a fun maze, providing a water-free re-creation of walking through a carwash. In the end, instead of emerging into a road, visitors popped onto a tiny dancefloor pumping Robyn jams. Everyone walking through spontaneously did a few seconds of dance moves before jumping back down to the street.

One truck was so simple it was almost empty, with just a small podium for a button and a digital readout in the back. Called “Seconds Since Last Injury,” a small plaque above the button read “Press button for 48,000 volt shock.” When pressed, the button delivered the promised shock and the digital counter at the back of the truck reset to zero. (It was fairly easy to tell when someone had pressed the button, due to the yelling that would emit from within.) The designer, Jason Eppink, said he’d spent weeks trying to work out “how to safely shock people” and eventually figured out that he could employ a Violet Wand sex toy.

“Of course, kink communities figured this out a long time ago,” he said, grinning.

Other trucks were much more involved, requiring participation from their audience. “The Ride,” written by George Graham and directed by Nonsense NYC’s Jeff Stark, was a short, surreal, surprisingly intense play set in an impressively designed fake ambulance. It was about the difficult and violent dividing line between life and death, and yet somehow managed to be funny as well. It also, for reasons too complex to delve into here, featured a large number of Ping Pong balls.

Another surprise was the “Pop Up Prison,” a truck made in partnership with a project called Inmate Letters. The truck was meant to semi-mirror the visitation hours at Sing Sing, the federal prison just 30 miles north of the city. “Warning,” a notice read on the truck’s bumper, “This isn’t glamorization.” It wasn’t: instead, a woman named Noelle received visitors into a truck made up to look like a prison bunk. A plate of mystery meat and cold peas congealed un-appetizingly on the floor nearby as she sorted through a pile of photos, letters, and legal documents, explaining some of the realities of prison life. It became immediately clear that Noelle had done a real prison bid, and was showing her own photos and sharing the real hardships she’d faced, like when letters from her loved ones were withheld and she received only a baffling form in prison legalese to explain why.

It was hard not to wonder if a street full of people who’d come to have a weird good time in some art trucks were all responding sensitively to the project. Noelle said some of them weren’t: “They just won’t really participate when they get in here, not exactly.” Our conversation was over almost as soon as it began; a “corrections officer” rapped hard on the side of the truck with his baton and announced that visiting hours were through.

Just across from the Pop Up Prison was a deviation from the box truck theme: a set of trailer-based public stocks. Volunteers allowed themselves to be locked up while their friends took turns with toilet scrubbers, tickling, and at least once smashing food all over their face.

Most of the trucks involved a group event of some sort, from game shows (Text Your Ex!), to a tea party in blacklight-lit forests with glowing uranium glassware (RadioactiviTea), to an opportunity to win Mac 'n' Cheese by figuring out how to poison a fictional prince (MACiavelli & Cheese). The games and group activities rewarded participation and connection, a group of fast friends forged out of the strangest experiences.

Some of the trucks were explicitly meant to create a communal emotional experience. The Forced Catharsis truck ushered small groups of people into a back room, where a high-spirited trio of deranged counselors led everyone through a speedy version of group therapy, aided by the odors of the dozens of raw onions on the tables and floor, and more frying on a hot plate just outside. The session ended with everyone being encouraged to jam their faces directly into an onion; by then, the supposed catharsis had clearly already been achieved, since more or less everyone was in involuntary tears. 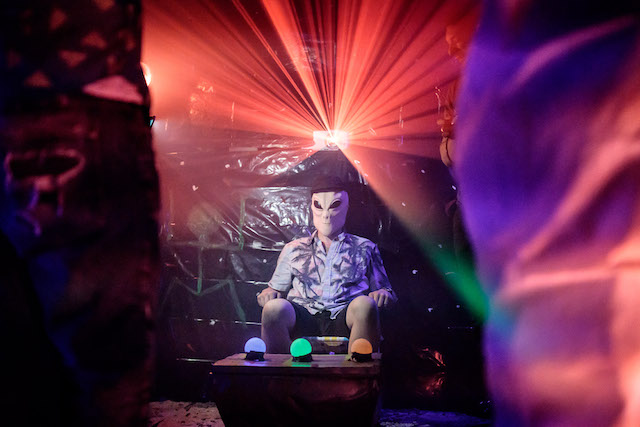 The “MUFON (Mutual UFO Network)” truck was staffed by men in white hazmat suits, playing MUFON staffers, who told visitors, in urgent tones, that they needed to find a way to communicate with the alien visitor within. If groups managed to make the right series of movements in the right order—a riddle they had to solve by searching the interior of the truck for cryptic clues written in black light on the walls—the solemn, Hawaiian-shirt clad alien would lift open a treasure chest to reveal gifts contained within.

Another truck, the “O-ccult Truck,” welcomed visitors into a candle-lit room with a long table filled with candy and snacks and offered “promotions” within the cult for various tiny things (like saying you wanted one) and encouraged people to gain higher status within the group by bringing them offerings (things shaped like an “O”), spreading the word by writing their symbol on other trucks, and bringing new recruits.

As the night started to wind down, two performers on the roof of a repurposed ambulance offered some late night entertainment, while a two-person band played an accordion and saw in the middle of the street. One rooftop performer spun a flaming hula hoop around themselves, while the second levitated in an unsettling old man mask. A group of people climbed into a purple-tinted party bus to be shuttled back to the subway. Slowly, the trucks—around 15 in total—started shutting their gates and melted off into the night, leaving the street empty and quiet once again.

#box trucks
#lost horizon
#Lost Horizon Night Market
#queens
#original
Do you know the scoop? Comment below or Send us a Tip