SuperPier won't fully open until 2015, but you can get a taste of what it will be like right now. We checked out Das SuperPier yesterday, which is currently featuring a pop-up marketplace occupying the cavernous southern end of the pier. The overall vibe was shipping container plus a bit of picnic table with a liberal dose of oversized typography, and some New Jersey skyline thrown in. Also: money, beauty, connections, and all the important stuff.

Long gone are the days that Pier 57 was called Gitmo on the Hudson, from now on it will just serve as a pristine prison built of our own materialism. And it's all, naturally, starting with Fashion Week (though some vendors have been on the pier prior to this). Opening Ceremony has opened the pop-up marketplace—called OC BTW* (*By the Water)— pop-up there for the week, operating out of two shipping containers. They've included vendors like DKNY, and... Rihanna, who has a line of clothing that totally looks like clothing Rihanna would wear.

Also on board: a "nail-artist superstar" (Naomi Yasuda); motion- and sound- activated blouses from Motorola and CoolHunting; shoes created entirely by 3-D printer; and even The (hipster) Newsstand has set up shop, hawking vaguely inappropriate zines and excellently over-the-top shirts by artist Nick Sethi.

But on to something we all crave: food stuffs, preferably artisanal. The line-up of food vendors include such semi-usual suspects as AsiaDog, Van Leeuwen Ice Cream, and La Sonrisa Empanadas, as well as lesser-encountered folks like Spur Tree (Jamaican), Better Being Underground (Sandwiches, Salads, and Sno Cones), and Scharf & Zoyer (whatever cuisine has Korean Lox Spread on its menu). Also, Dominique "Cronut" Ansel is stopping by tomorrow to publicly unveil his new creation, which we got an advanced taste of yesterday. 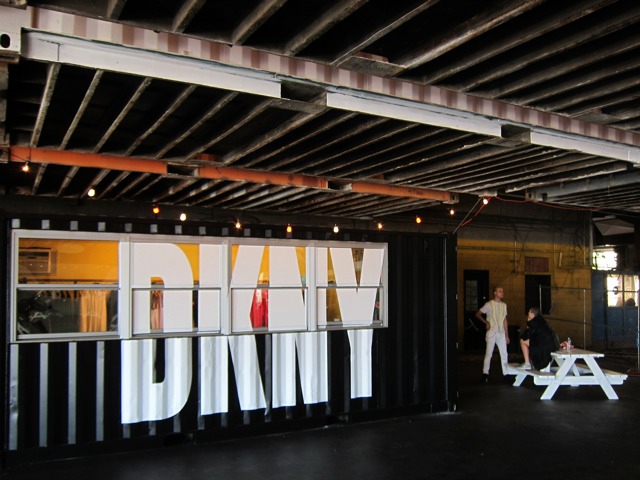 You'll also find models and music, and all Fashion Week there will be parties in the evening—some public, some private, and all with scarce details... so maybe just show up?

SuperPier is located on the Hudson River at about 15th Street. Opening Ceremony BTW* will be around through September 12th, opening each at 11:00 a.m., closing every day at 7:00 p.m., except Sunday, when it closes at 4:00.