Two things made this year's 4Knots Festival, headlined by Super Furry Animals and Stephen Malkmus & the Jicks, different from any other in the past.

First, unlike the previous 13 years of Village Voice-curated summer music festivals—whether Siren at Coney Island or 4Knots at the Seaport—yesterday's all-day concert was NOT free. Tickets ranged from $25 for regular general admission to $50 for VIP access, which basically got you onto the enormous ship docked next to the stage, the Hornblower Infinity.

Second, 4Knots 2015 was held at Pier 84, a much more sprawling venue than anything in prior years, and more isolated as well, located at 44th Street and jutting out into the Hudson River. So if you were there yesterday, and it felt like many fewer people out spread out over a much larger area than you remember, that's because there were! 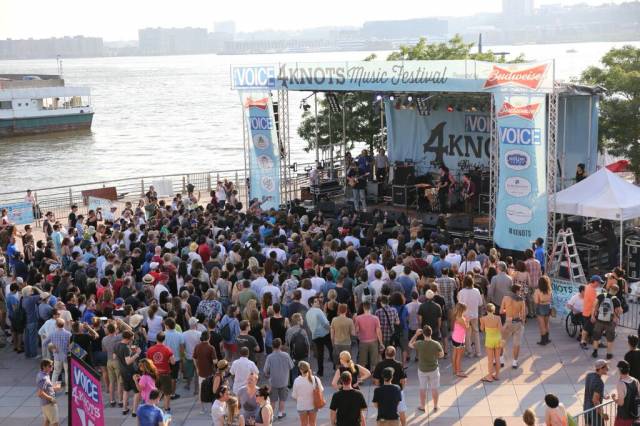 No surprise, everyone seemed to enjoy the relatively plush situation, with the shade and the nice grass, and no lines at the beer stands, food vendors, or port-o-potties. And if any of the ten bands on the bill were discouraged by the sparseness of the festival crowds, they certainly didn't play that way, with every set I saw tight and roaring with energy. Especially Twin Peaks, who, if the folks in the fronts rows during their set were any indication, clearly have a rabid fan base.

Other musical highlights of the day included Marissa Paternoster of Screaming Females ripping the place up, Mikal Cronin playing guitar god, and, according to sources at the stand where they were giving out samples of flavored seltzer, two gentlemen in opening act Surfbort leaping from the Hornblower Infinity after their set, and then promptly taken away by the NYPD.

Speaking of the Hornblower, this was possibly the least rock-n-roll vessel on the planet, but for most VIPs the overall spaciousness and ample seating trumped any lack of cred. And the sound from the stage was surprising crisp, even on the upper deck.

#4 knots
#festival
#Music
#village voice
#original
Do you know the scoop? Comment below or Send us a Tip